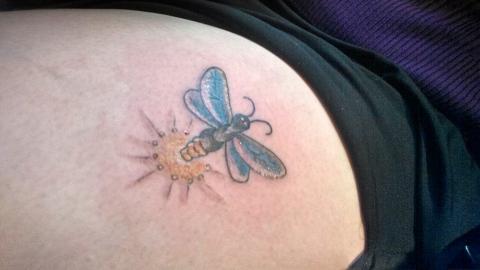 I was staggering, drunk, holding onto my cousin as if she was now my physical crutch as well.

It was pitch black, the trees surrounding us, and if they weren't attached to mother earth,

Held down by their wooden placenta, they would reach out and grab us.

Perhaps the world doesn't spin and it's just the sangria.

And while you do so, you realize how drunk you are,

I stumbled out with my crutch again, as she held a flashlight in fear of raccoons.

Even the fireflies were asleep.

For just a moment, we pause, and look in the clearing of the trees,

A place where the green does not yet touch the heavens.

Stars like glitter sprinkled on the floor by a child.

I continued to stumbled back into my tent, when I would fall asleep, still afraid of raccoons.

I woke up the next morning to see my Facebook feed reading "RIP" to a former classmate.

With searching through profiles and pictures of girls with black eyes,

Black eyes and stitches as proof of survival that their friend did not earn,

I learned the while I was gazing at the stars,

She was laying in the grass, dying, probably doing the same.

She had been ejected from the vechical on her way home from a bonfire.

Whoever she lived with sent her off, expecting her to come home.

I spent the rest of my tent nights pondering all of this.

Death had not seemed real until that moment

Even though I had watched air escape lungs for the last time.

Death had not seemed real until that moment

Even though I attempted to bleed out by will.

Somewhere between the thoughts of stars

And the hope for making it to my future

And being out where the elements could dig into my skin

The night before we left, there were rains

Rains like the kind Noah built an arc for.

And in the eye of the storm, I found the drowning fireflies

And I put them in a cubby, away from their demise.

In the day, they are but ugly bugs,

But at night, they are a child's wish in a jar

The realness of death

55 reads for this poem