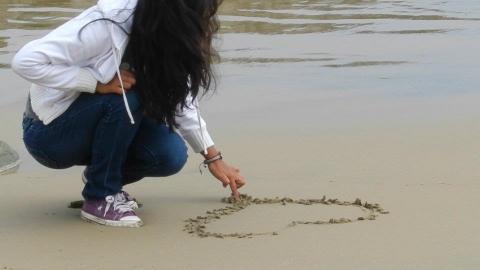 She's beautiful.
She drinks, smokes and parties all night every time she can,
No one has truthfully told her she's beautiful,
She thinks she's not worth it,
So she makes herself "worth" the time for all of those who are trying to find someone "fun".

She's desperate.
Thinks work pays almost nothing so she tries to find another way instead of complaining about the little money she possesses
Her receipts are in the trash.. all they seem to mark are those things that make her laugh for some hours at night
But she keeps complaining about the money
And you don't know what she does, what she says, her thoughts aren't the same.

She's damaged.
Hope is not clear, her heart seeks something else but can't find it anywhere she goes
Her path is full of broken hearts, families and miserable companies
She doesn't even past 25, and her tears make her hidden bags full of makeup, somehow visible
And she doesn't notice how destructible she is... To herself
She says she hates everything, everyone, but she doesn't realize she's showing that she hates herself more
She doesn't listen, there's someone that loves her
Someone that wants to put her in His arms and make her know and feel she's worth it
Make her know she has a purpose
Make her know she's someone.

She matters.
Her past might make her the least person expected to receive love and compassion
But compassion and love is what she needs and wants the most
Her wounds might make her the most unfortunate person but she always searched in the wrong places without really opening her eyes.
Her smile is broken, all she tries to do is keep living the life she lives with no purpose and no idea why she does
She has tried to end her life so many times, she still does
Doesn't know what's stopping her, who's stopping her
Doesn't know why or when or how
Hasn't really met someone who could give everything to save her from everything she has and doesn't have, from everything she has passed through, everything she is..
Her present still screams change but she considers that it'll all go just well.
The spits she has received, the beatings, the pain, the self-damage.. the tears, the hurt she has caused to some guys that actually wanted something good for her,
the death: because she didn't want to take care of the results of her actions, like her mother that left, the decisions..

And yet,
She's still beautiful.
An unique creation that was made to be well.
And yet,
All that we see, is not what He feels,
She's still so beautiful in His eyes. He still has died for her too, He still didn't think of stopping them from hurting Him second by second, just to see her smile one day.. If she only chooses to.
And yet, to Him, she was worth the sacrifice, the nails, the drops of blood.. forgiveness.
Love is waiting for her,
She only needs to receive it.
She only needs to Know that Love is waiting for her to know.