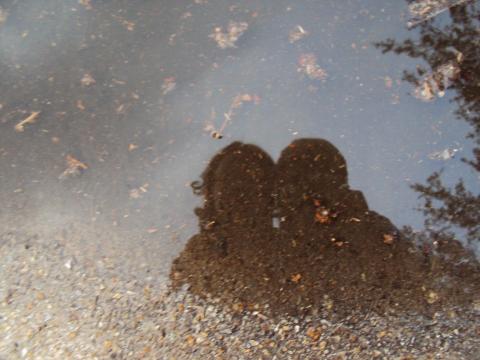 He haunts me.
Like a ghost, my husband haunts me.
The red-tailed hawks that cry out over head
taunt me mercilessly.
That was his favorite bird of prey.
Cardinals that whistle and sing as the day wakes up
sound more like the heckling jeers of a guy
than the familiar slow trill of cheer, cheer, cheer.
The doves that are everywhere in my neighborhood,
hanging out in two’s and three’s on the branches
in the giant oak tree I’m sitting under
remind me that instead of “my love,”
my nickname for him was “my dove.”
And now.
Right now.
In this very instant called now…
Seeing the fawn colored dove
and hearing it coo makes me sad.
Sadness.
Pain.
Seaping, gaping open wound that does not, will not heal.
Every cell in my body cries sometimes.
A weeping cry.
And I can’t remember when it began and I wonder if it will ever end.
“Yes, I’m well Doc.”
This is what I imagine I will tell my boss
on the morning after a long arduous day of grieving –
when the intensity of the pain has subsided but
I’m hung over from the emotional disemboweling.
“Please don’t probe,” I think to myself.
“I promise that the heavy wet blanket of sorrow
I wear on my shoulders will not affect my job performance today.”
Really I just want to hide in a cave and recover
because I don’t want to get good at faking it.
I wear my emotions the way I wear clothes.
They are palpable like the poly-cotton blend of my shirt.
But for now I am too tired to think about him anymore and for that… I am grateful.

He took his life on August 7, 2009. It was a brutally violent suicide – the final undoing of a life lived in quiet, deep-seated anguish. He was tormented by his depression but from the outside you wouldn’t know it – unless, of course – you were close to him. He was beautiful; a boyish handsome face with perfectly symmetrical features, the kind of good looks that attract men and women. His smile spread long and broad across his face revealing his straight, white teeth. Although he was on the shy side he was flirtatious and charming. His smile could make me blush or feel butterflies in my belly. It was contagious, his smile. In fact, it was the thing people commented on the most at his funeral. Everyone would remember Scottie’s smile.

Guide that inspired this poem:
Suicide Awareness and Prevention

Beautiful imagery and the poem is very haunting. Please read my poems and tell me what you think