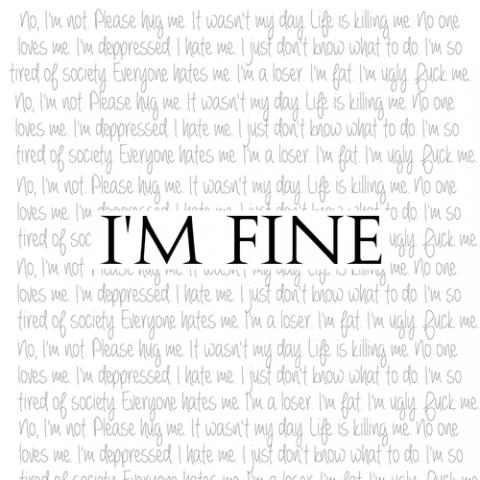 I wake up each day, a new dawn,

and yet they stick to me like the sap from a tree.

The world expects to hear that "I'm fine..."

everything is just dandy over here while in my mind

war rages with the person who I am and who I want to be.

They say depression is not of someone but rather a manifestation of your creation.

They say eating disorders (or ED, as I call him) is a choice in which

you are the sole aggressor

really life handed you cards too cruel to admit

Some may say that "there's always a reason" for the

situation you find yourself in

that some power outside your control wants to show you

something you may not have known.

Yet you look away

unsure of what to say to an idea so incredulous

because faith isn't for everyone though it is for some.

And you may only need a good few

to make you laugh on the hardest days.

See here, society has this fantasy of what life is supposed to be

but they forget that YOU are uniquely, wonderfully, yourself.

So, Depression may wander the woods of your mind

but it's not your fault and it's not invalid

it will always be a part of you.

But that's why we have those good few,

the ones who drag us out of bed and give gifts without national causation,

let you cry until your eyes go red

and still have their own shit to deal with...

but love you too much to not try and brighten your day.

As the sun sets you realize

maybe it's not so bad after all

I may not have alot but I have just enough

and as you drift to the sweet sound of dreams

a smile lay on your face

knowing that the morning will always come.

This poem is about:
Me
My community
My country
Our world

70 reads for this poem