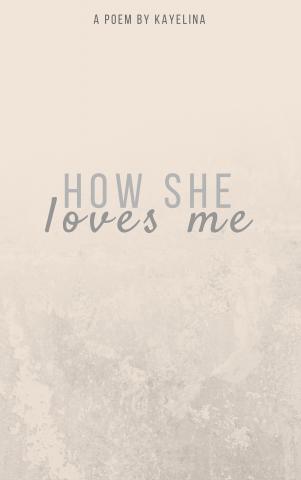 I'm going to tell you a story. It's about a girl who thought she was extraordinary. She let the confident sway of her hips determine who she'd let in next, and she vowed to never let it get too complex. Now she let in boy after boy, old ex after old ex, and she thought that it was luxury and not at all like adultery cause who needed fooling? Every day people thought there was one side to her and every night they thought she slept when instead she stayed up giving photos of herself to other guys who'd accept. She's lost count but it's all good fun so what's done is done. Then she hurt someone. Someone of great importance and significance with words that intended to posses innocence but instead brought nothing but dissonance and unwanted distance between herself and a truthful substance. She stood there speechless but continued this life of recklessness. She met one final boy, one who didn't know the difference between a girl and a toy. On January first of this year while people are out rejoicing their new beginnings, this extraordinarily ordinary girl wanted to try vodka for the first time to keep on grinning and living this rebellious life. She took a sip or maybe four and watched as South Park brought her galore. Somehow and suddenly she's kissed and convinced that something crazy as to happen when the clock strikes twelve so New Years won't be missed. And something crazy happens indeed. Pain began to erupt between those confident hips. Those same hips that swore not to get tricked into thinking anything means more nothing. Those same hips had given a little more than what she bargained for that night because of a simple boy's lie that he liked her back. On her back is where she lied, laughing and crying, convincing herself it wasn't real and that he was nice and that it was okay. A failed mechanism of defense. Afterwards, a text saying he didn't regret and a few "dates" here and there and then three months too late, is when the truth that he doesn't care comes out and that after he took her home that New Years night, he picked his ex up and took her too. The only difference was she said yes. Now this extraordinarily ordinary girl may have been first that night but she was always second. No matter what she said. Now as you probably have guessed this girl in my story is me. I am telling you my story because no one has ever told me theirs. People don't believe and for a while I didn't want to believe that something like this could happen to me, nonetheless destroy me. As a matter of fact, it implored me to search for a way out of rock bottom. I learned to steady my hands at the mention of his name through the art of writing. And I learned how to construct my own definition of beauty through poetry. No one taught me -- I was forced to realize that there is more to life than what sucks in it. No one tells young girls that confidence isn't in crop tops, Victoria Secret's double Ds, and physical conquests. Now that isn't a crime and don't think I'm disputing that, you can do what you like, but I want to tell you what some adults don't until it's too late. Work out and for yourself only. Kindness is always welcome but a necessity for yourself. Don't think whatever you do with whoever you meet in high school is forever because that just tells me you haven't thought much about your future ever. Focus on what matters, your studies, your body, and the proper friends, and if a prince comes along, snatch him but don't go searching for that glass slipper. I'm sorry. Maybe you wanted standup comedy and instead got a heartfelt testimony. I just wanted to show you, that someone like you, can posses true confidence and stand for more than the stereotype that teenagers don't know anything. That teenagers just drink, screw, and smoke because heck, we're supposed to and we can. If a seven year old wears her mother's makeup that doesn't make her a mother. Be you and only. Worry about you and only. Remember that you are more than a hormonal teenager. You are an extraordinary life-changer. Don't think help is in a boy or a casual friend -- I've been betrayed and I have betrayed both. Learn from the mistakes you don't get any retakes. Take the positive and the flaws but don't believe the negative when they tell you, you are a loser. You are a life-improver that can only bring good in this world if that is what you allow. So please don't let these words go away somehow. I hope you find joy and peace like I have in this crazy, unfair time called puberty. And I've been told, that the troubles don't stop there. But if you believe in the impossibility of organs and oxygen working together to breathe life into you then you sure as heck can continue. Just don't stop there. Don't let him stop you there.

Poetry Slam:
You, Me, and Poetry Scholarship Slam - CLOSED
This poem is about:
Me
Our world

79 reads for this poem