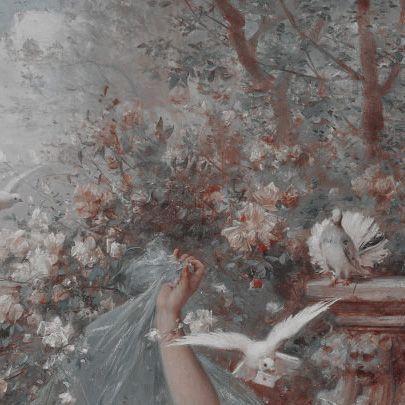 is a topic of controversy that dwells amongst great populations -

from a young age, I was exposed to such trauma of Death in circumstances that a young princess should not have withstood.

the white walls of my heart suddenly became tainted with decay, the revealment of death decomposing the innocence of a fragile girl to the jarring reality that is not told in fairytales.

my mother would whisper in my ear, “they’re still here” but I would shout in denial, for I was so overcome by this concept, it was as if I had unlocked the gates to my own personal Hell.

but I have grown, and yet the sleepless nights I spend wandering about in my bed sheets, glaring at the night lights I have scattered about each corner of the room, I no longer am obsessed with this unknown fate of death, for life on this earth is meaningful.

those who have moved beyond are not gone, no matter the religion you encompass in your heart, but rather they take the form of life and objects scattered about you -

the sudden whisper of the wind that brushes against your ear,

the comfort of the shoulder that represents one’s finger caressing your skin,

the rising of the sun as it traces your room with the reflection of its golden rays,

the insight unexpectedly gained during moments of crisis, as if someone advised you to do so,

the visits in your dreams that replace your nightmares with messages from those you’ve loved,

the cardinal that softly lands upon a gravestone, a visit from those who lay beneath.

these simple acts of nature can be otherworldly, for no one is ever completely gone.

life does not just suddenly end, for the years that were spent living have embodied too much meaning to be suddenly forgotten amongst the fallen ships of the sea.

life is merely continued into the next chapter to ensure that life on earth is well spent.

Poetry Slam:
O Captain, My Captain Scholarship Slam — CLOSED
This poem is about:
My family