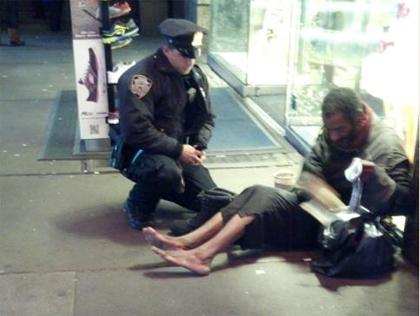 I come from the city that never sleeps,

but evidently it's not as awful as it seems,

two diamonds in the rough with messages to transcend,

strive to keep their mind straight when society bends.

A brimming problem flashes in me in the eyes,

the one kind of person that everyone seems to despise

We collectively envy the affluent and selfish young man

but who does not empathize for the extended empty hands

that reach out on the streets of Broadway

Because they are not qualified enough to get paid.

keep it locked in a vault and rub it off,

why doesn't the man just get a job?

The life chose him not the other way around

it ain't as easy as you thought

he spent his salary providing for his bedridden mama

had to work two jobs and overtime in the summer

his father left in '02 and died of alcohol poisoning

only him and Uncle Drew at the funeral, no one else came crying

had to take care of his younger siblings, that's right

and when he got his legs stuck in that engine

Emotionally distraught and encompassed in the sadness

He lived a life you will

Poetry Slam:
America the Great?! Scholarship Slam - CLOSED
This poem is about:
My community
My country
Our world

15 reads for this poem