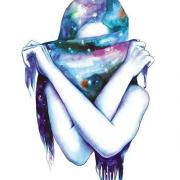 She ripped herself apart
On caffeine daydreams of being perfect,
An immaculate entity, cut from marble,
The beauty queen of only seventeen.
She sought to be someone more –
More out-going, endlessly glowing, all-knowing,
Always easy-going, brown hair flowing,
Kiss-blowing,
Perfect.
So she bat her cartoon eyelashes,
Flashed a toothpaste smile at anyone who came by,
Tilt her head towards the blue sky,
And offered her never-ending, dazzling roars of laughter,
Leaving others blinded, hypnotized,
Stunned,
At the brilliance of her infinite energy.
But in the darkest hours of the night,
You could find her weeping into the soft arms of slumber,
Plagued with insecurity,
Hopelessness,
Consumed by the thoughts of all her flaws,
That dug into her skin like poison-laced claws,
For no apparent cause.
She. Was. More… In a rare, peculiar sense –
This pathetically beautiful,
Empathetic girl,
Pointed out the grace in clumsy, stumbling,
Homeless drunkards,
Appreciated the artistry of
Knotted spider webs,
The way sadness flows and ebbs,
Saw allurement in grey storm clouds,
Stood tranquil in massive, rowdy crowds,
Chose to hear words of love in her mother’s scold,
Felt warmth when it was dark and cold,
Simultaneously chaotic and controlled,
Could make you feel like you’re made of gold.
And so she realized with time,
That she is flawed,
But innately charismatic,
Graceful, compassionate, magnetic,
Created from something Otherworldly,
Something more fascinating than any daydream.
Her heart of Stardust, as coolly ethereal as the sea,
Possessing the ability to feel everything around her
So very deeply,
As she tip-toes across the earth,
Launching herself on every wave of opportunity,
Taking her kind, Cosmic soul with her,
Queen of the Galaxy.
Poetry Slam:
#NoFilter Scholarship Slam - CLOSED
This poem is about:
Me