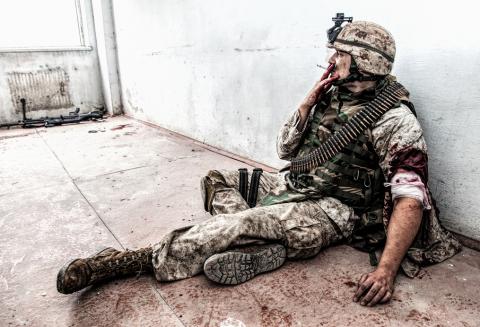 On Patrol South of the Haifa Street Outpost during the Surge

On the side of the blood-soaked road, just west of river Tigris,

A woman soothes a naked child to sleep. She stares.

From under her niqaab, her dark brown eyes encircle us

With pity, as we descend from heavy armored Strykers

That swallowed all the midday heat that scalding day of August.

Again, that stench of sewer and death have occupied our senses.

Within the hour, the silver salt of sweat, and grime, and dust

Covered our boots, fatigues, and even our ballistic vests.

As grunts are marching down that blood-soaked road,

One faints from dehydration; another from fatigue.

No enemy in sight, but nature’s pure distaste

Of armed but silent brotherhood of men.

WHEREAS, The soldiers of the 3rd Stryker Brigade Combat Team, 2nd Infantry Division, were sent to Iraq for what was to have been a year-long deployment; and

WHEREAS, The 3,800 soldiers of the 3rd Stryker Brigade stayed for fifteen months in Iraq, after seeing action in Mosul, Baghdad, and many other parts of that country considered among the toughest and most dangerous; and

WHEREAS, The troops of the Arrowhead Stryker Brigade, as they are also known, moved farther, faster, and fought harder than any other unit in today's army, according to commander Col. Stephen Townsend; and

WHEREAS, The soldiers of the 3rd Stryker Brigade were credited with saving and changing the lives of Iraqi people; and

WHEREAS, Through the bravery and dedication of the 3rd Stryker Brigade, areas of Iraq that had been abandoned by civilians due to extreme danger were repopulated; and

WHEREAS, Through "Operation Arrowhead Ripper" to clear al-Qaida insurgents in Iraq, soldiers from the 3rd Brigade captured hundreds of enemy fighters and cleared dozens of bombs and booby-trapped houses, making it possible to then launch humanitarian relief efforts; and

WHEREAS, The 3rd Stryker Brigade lost 48 soldiers, and suffered the wounding of 700; and

WHEREAS, The members of the 3rd Stryker Brigade were redeployed to Fort Lewis in September 2007;

NOW, THEREFORE, BE IT RESOLVED, That the Washington State Senate honor the sacrifice and valor of these Soldiers who served their country with great distinction and honor, and express its appreciation to their families for the sacrifices they made during the deployment of their loved ones; and

BE IT FURTHER RESOLVED, That a copy of this resolution be immediately transmitted by the Secretary of the Senate to the commander of the 3rd Stryker Brigade Combat Team, 2nd Infantry Division.

I, Thomas Hoemann, Secretary of the Senate, do hereby certify that this is a true and correct copy of Senate Resolution 8709, adopted by the Senate February 1, 2008

Secretary of the Senate

Poetry Slam:
Slam for Suicide Awareness and Prevention
This poem is about:
Me
My country
Our world
Poetry Terms Demonstrated:
Metaphor

84 reads for this poem