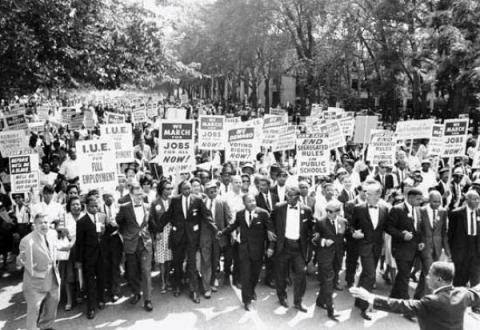 The Civil Rights Movement,
A time of lament
For the many lives lost
That stood up without a cost.
A voice for the people was what they all yearned
But many refused to rebel to avoid a worse turn.
Faith was all the colored had to rely on
In the hopes that they would be left alone.
Peace was what their hearts desired
Rosa Parks and Martin Luther King Jr. gave them a chance to be inspired.
The strength that those leaders possessed within
Allowed the black community to be devoted to win.
Strikes, boycotts, and unfortunately riots
Provided them with a voice that would never be quiet.
Finally awakened, the voice of Strength
With a little integrity worthy beyond lengths.
Dedication was the key to unlock Freedom
So the colored never abandoned their journey to reach the kingdom,
The kingdom that was known as the “Free world”
Which Martin Luther claimed was
“…where little black boys and black girls will be able to join hands with little white boys and white girls.”
The colored forbade for there to be a sequel
So they let the voice be heard one last time:
The voice of the people.