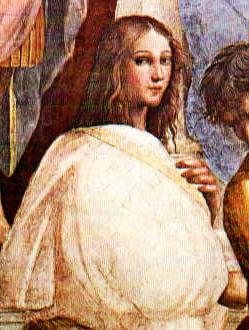 I speak Pythagorean,
Platonic, stars, and shapes,
imparting my knowledge to others.
They love it, and tell me
that I am Minerva, incarnate
highest, uppermost, supreme.
I’m not so sure, I simply feel my soul
as a Mercurial unit of population,
yearning for understanding.

In absence of Theophilus,
the Archbishop remains
in opposition, Martian,
Saturnine, square.
During a night of Lent, movement ceases.
I peer out into the haze and shriek
as juxtaposed figures unfold.
The zealots grasp my arms
with rough and unclean digits.
They tear my clothes and forcefully subtract me
from my seat, call me harlot,
witch, messenger of hell,
fasten me to the back of my own carriage,
and drag me through the streets of Alexandria.

The Caesareum is radial,
gelid, stern, and as morbid as the monks
scattered across its circumference,
set out to make me.
I was to be the perfect descendant
In eyes of Theon.
Now, I know I will be with him
and Synesius soon
as shells and tile intricately divide my skin

They obliterate my body
by flames in Cinaron
whilst holding spheres of influence
that create no music,
timeless, Plutonian instruments
of creation and resonance.
Through them, history is written to forget me.

Hypatia of Alexandria, was a prominent Greek mathematician, philosopher, astronomer, and astrologer that became a monumental symbol of intellectual freedom and scientific enquiry. One night, Hypatia was dragged from her carriage and brutally murdered by radical Christians in 415CE. The details surrounding Hypatia’s life and death are few and far, as Christian historians achieved predominance around the time of her life, but the general consensus is that followers under the rule of Arch Bishop Cyril dragged Hypatia to a local church, stripped her, scrapped the skin from her body with sharp objects, ripped off her limbs, and then burned her remains. The death of Hypatia occurred during a volatile political struggle between the mass acceptance of Christianity and Neo-Platonism, or religion in relation to science in ancient Greece.