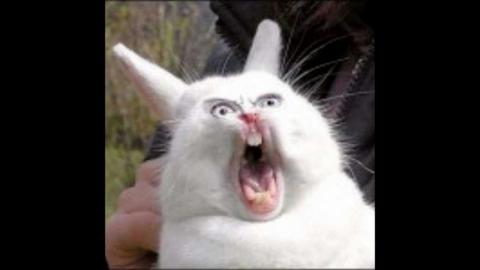 I started feeling really dizzy and nauseous and was crying so badly, I could barely see nor breath through the tears.       My father started running around the cage like a crazed maniac, spit flying as he was screaming that he would show me.       Then my father grabbed honey bunch from her cage, holding her by the neck and the look on that rabbits face was horrifying.       I was still on the ground bawling and begging for her to be spared when he hung her upside down and tied her back legs up.       Honey was making those horrid sounds that rabbits make, not loudly, but you felt the screams throughout your mind and body.       My father picked up the concrete filled lead pipe and I could see the dark stains from other rabbits that had been killed.My father screamed at me to shut up and deal with it.       "You will not die from this shaunda. You will wake up tomorrow and you will know that God gave us animals as food and for pleasure, not something we are supposed to love to the point of obsession. And to prove my point even more, you will not only kill it, but you will skin it, you will eat it and you still will not die from it." my father screamed.         Why I didn't run from him as he pulled me off the ground, I'm not sure, except maybe shock and the fact that I believed my father was omniscient. I knew he was more powerful than god, and my fear of him ran so deep that if I ran from him, far worse things would happen.       I had a pet baby goat and a pet chicken that was crippled. No telling what my dad would do to them if I ran, but it would be worse than what was happening to honey bunch.       At this point, I knew honey bunch was going to die and that was a fact. There would be no stopping it.       I stood there and looked into my fathers ugly red eyes and told him with venom in my voice that he could physically force me to kill, skin and eat honey, but that was exactly what he would have to do. Physically force me.         Enraged, my father grabbed my hands, forced them around the pipe and started swinging.       At this point, I felt as if someone had poured hot liquid into my body, and then I went ice cold.         I couldn't feel my hands or feet anymore. I couldn't feel my body or anything at all. It felt like my entire person had just drained out of my body onto the ground.         I felt free. Free from emotion, fear, free from everything. I could see the father screaming, but there was no sound.         And I smiled.       I saw myself as if I were standing above myself, watching  a slow motion, silent movie. I had absolutely no connection with the girl below me, the man screaming at the girl, the dead rabbit, nor anything that was happening below me.       I could see the father and the girl swing the pipe at the rabbits head, over and over.         Frenzied bashing, bashing, bashing. Blood and brain matter splattered the girl below me. Splatters on her face, blood dripping down her arms. They kept bashing until the rabbits head was just pulp.         I saw the girl below me crying, and we killed that rabbit without any sounds or smells at all. As I watched, I realized I had become the zombie I had always been afraid of becoming, and then realized it was a lot better than being the girl below me.

76 reads for this poem