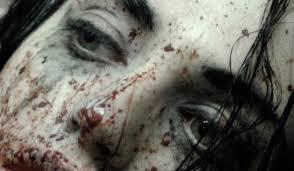 the monster in my dreams

who is it who tortures me?

with no answer to my plea

a silent scream I will release

because of what I see,

in these grusome scenes

I am wishing they would cease

or show something else,at least

the day was the precous time I leased

but at night my fear increased

I didn't want to go to sleep

but I had no choice, my hope deceased

with the fear of all these dreams

cause I was tortured in my sleep

by the monster in my dreams

who had killed my family

but it's not real I would say

oh, your family is okay

just wake up and don't you cry

tears are for those who actually tried

for those who deserve to break down. but why?

you try to tell an eight year old she's fine

"oh you don't need to fear the dark"

but she didn't have the heart

her eyes had lost their spark

"cheer up" they would remark

but she could not forget what she saw

but her family was her last straw

because loyalty was her fatal flaw

so instead she learned to draw

or daydream,where she created the law

all was fair and all was all

she stared the beast in the jaws

so with courage and prayer her fear thawed

this is my story. when I was six I started having night terrors and

my fault and I was also hit, kicked ,whipped and cut. finally I stood

didn't really stop till I was twelve or fourteen. I still have trust

but it's getting better. I just have to remember that the only things that