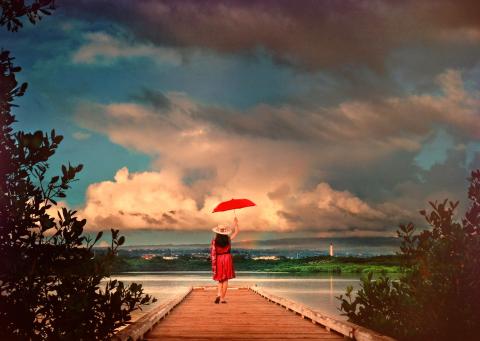 Johnny came to visit when I was nine

He only had the chance to just that one time

He still smiled as often as he always did

But his smile seemed almost crooked

I asked him why that was and he said:

“You never really can come home”

He said, “You’ll see the trees and the grass;

The leaves fall but they come right back,

And the sun shines and you breathe in its rays,

And your thoughts and your words will get blown along with the wind,

It will spread it around the world and they will never die;

And you will dance with the breeze, and you can try to come back

Don’t let them fool you – the world is ours…

There’s only time to be and no time to go….”

And then he paused and he smiled and then he winked

This time his smile was straight

And it was my turn to roll the dice

Two months later I was nine and three quarters

I watched the men in suits and badges

Carry a flag and Johnny’s casket

The preacher man said he was a good man

He left with honor and gave all he had

And one by one we left Johnny roses,

And one by one the whole crowd floated

Until it was just Cornel Mike and me

We stared at one another silently

He walked on over and said,

“I’m sorry, kid, your brother loved you very much”

And then he walked away before I could see him cry

Daddy tried to be strong

All our friends tried to comfort

And I just tried to be numb

I told no one about the note

And I no longer could bare the noise anymore

I covered my ears and I slammed my bedroom door

I unfolded the paper

And there, written with a trembling hand and dying ink,

“Don’t worry about me; I’m only going home”

It was my first visit from college back to home

I swear I almost ate the whole Thanksgiving turkey

But a piece within me still felt empty

Where I had my first kiss

But its hands were bowing low

Everything was the same but something was different

I guess you never really can come home

At twenty five, I caught my fiancé cheating

I packed my bags and got to leaving

Only … I had nowhere to go

So I went across the world

And in Guiyu I fed the beautiful little souls

I meditated with the monks of Sarnath

I prayed in Rome’s cathedrals

I sang with the ladies of Rwanda

One woman told me, there, that was what made them happy

She asked what made us happy here

And I said, “Shoes and cars”

And under the glistening sun surrounded by the songs

I, too, laughed at all that was gilded

And I understood the joke

And right then I knew

I never could come back home

At thirty two, my husband’s job moved us to California

An angry wind took down the house

And scattered all we had around the state

We lost all that was once ours

The sun shined after the storm

And months later, we still had much to fix

But I sat by the ocean

I had nothing left

Not even a home

And the Ocean’s waves kissed the shore

In her song she whispered a secret

I could not make out her words,

But she wanted so desperately for me to hear

And that’s when it hit me-

“You’ll see the trees and the grass;

The leaves fall but they come right back,

And the sun shines and you breathe in its rays,

And your thoughts and your words will get blown along with the wind,

It will spread it around the world and they will never die;

And you will dance with the breeze, and you can try to come back

Don’t let them fool you – the whole world is ours…”

And my thoughts were the wind

And my songs were the waves

And my journey was the leaves

And my love was the sun’s rays

And we would never die

And it was when I had nothing

That I found I was everything

And I looked up and I winked

Because I knew that Johnny was watching

And the Ocean and I sang it together this time-

Because I was home.

Poetry Slam:
Everything is Awesome Scholarship Slam - CLOSED
This poem is about:
Our world
Poetry Terms Demonstrated:
Repetition