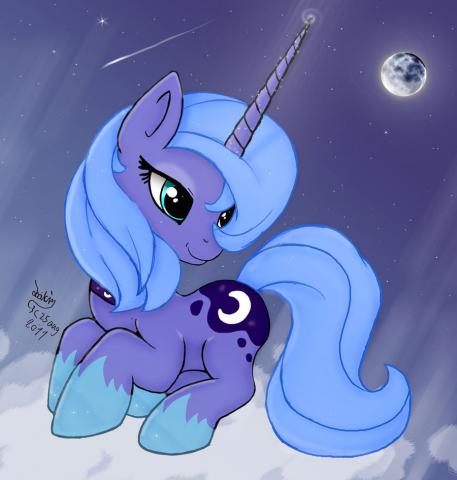 The burden of the night princess is often hard to bear.
She often lies awake at night for something that’s not there.
In the sun her subjects laugh and play, but at night they fall asleep.
She wishes they would play with her, in the dark and quiet peace.
Luna lies awake at night with no one to be seen,
And often wonders why she suffers this dark and lonely dream.
Everyday at sunsets end, she lifts the moon and stars,
She paints the sky with misery, and all her hurtful scars.
And every night while fillies sleep, she sings a lullaby,
She sings the song of loneliness that often makes her cry:
For all my loyal subjects as you lie asleep in bed,
I bring you dreams of lovely things, put hope inside your head.
But none of you have thanked me once, and none of you ask why,
That right before you go to bed, when you look into the sky,
You see the stars and moon above and you feel a cringe of pain,
You see that all the things i do are painfully in vain.
Luna’s hate burned up inside and eventually boiled out,
Surrendering she gave her soul to the nightmare queen of doubt.
She tried to rule Equestria through suffering and pain,
was banished to the moon above, by her sister she was slain.
A thousand years had come to pass, and she rose up once again,
Celestia had had enough, she wanted Luna tamed.
The kingdom must be ruled by two, she wants things to be right,
She calls her sister back to her, her princess of the night.
But nightmare moon did not like change; she loved her endless night,
She lied to Luna telling her that what she’d done was right.
The elements of harmony used by a group of friends
Brought Luna back to normal, and the nightmare to an end.
Celestia apologized for all that she’d done wrong,
A thousand years up on the moon was entirely to long.
And everything went back in place, as normal as could be,
For Luna changed her evil ways, and they all lived happily.
The burden of the night princess is often hard to bear,
But with the power of friendship, the burden can be shared.

72 reads for this poem