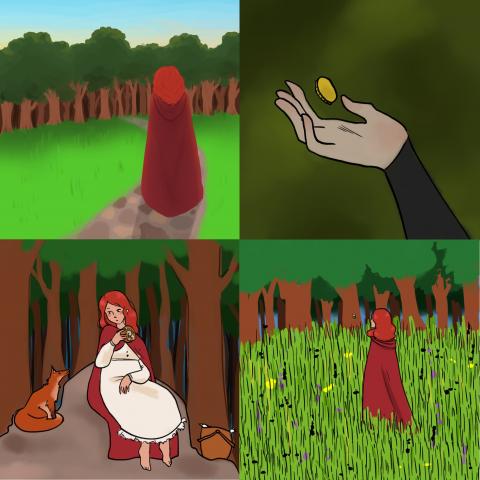 Once upon a time there was a girl.

She inspected herself with a small, dainty twirl.

Leaving her home with a basket in hand,

She was off on her way to travel the land.

From a spark to a fire,

With her quaint house behind her,

And the seed of adventure growing inside her.

In the tall grass at the start of the wood,

She screeched at the girl who stood on the track--

A girl that she hoped to drag off to her shack.

Then just like the wolves, I’ll eat you up whole!”

But the girl with red hair

Pulling just one golden coin from her bag,

She handed it over, sating the hag.

And though the woods loomed terribly,

She continued on merrily,

Singing a song with the utmost sincerity.

Hours later the sun was high in the sky,

And the little girl’s day was just flying on by.

She was still on her way down the dirty, old lane.

Her pale feet were bare, though she felt no disdain.

When she felt hungry

Pulled out her pack,

And started her snack.

Now, besides the young girl, a scarlet fox crept,

He looked left and right, before he gracefully leapt,

His tail brushed her knees.

His pretty fur rustled by the afternoon breeze.

Her hands squeezed ‘round the basket enclosing her goods.

“Little girl, little girl  you must go back to your home.

You cannot stay here, where the beastly wolves roam!”

But she only smiled, and shook her red curls,

And continued on eating her cinnamon swirls.

As soon as her sweets were diminished,

The girl stood up, finished.

To the fox she curtsied,

Before telling him curtly,

So your silly fears must wait, don’t you see?”

Then she gathered her things,

And cheerfully went on her way.

With a great forlorn sigh, the fox continued his day.

As the girl walked through a field of sweet smelling flowers,

She hummed to herself, passing the hours.

When she heard a small voice

She did not rejoice,

“Please, just listen to what I must confide!”

So the little girl turned,

But her golden eyes burned,

The bee’s wings were blurred,

But her small voice was heard,

As she nervously said,

If you don’t turn around,

I doubt that you’ll ever be found!”

The girl’s refusal was stern,

But she thanked the creature for her concern.

Into the trees she disappeared,

Leaving the poor bee quite afeared.

Now in the deepest and darkest part of these woods

Where the oldest and wisest of the great oak trees stood,

The girl was stopped as she passed on by

And this time she doubted it was just to say “hi”.

Please stop for a bit,

And if you’re not in a hurry,

Perhaps you can sit?”

Polite as she was, the girl could not refuse.

So she sat down in the mud,

It was then that a large toad hopped on her knee:

The girl smiled and sat there,

The breeze rustling her hair

Looking down at the toad with a peculiar stare.

The girl nodded her head at the toad,

Before glancing oddly down the scarce traveled road.

If he noticed her look, the toad didn’t say,

But croaked once in reply before hopping away.

The sun had completed her arc,

The forest was dark,

And the moon was beginning to climb.

The grandfather clock had just struck its ninth chime,

But the little girl went on, unaware of the time.

Far behind her, a deer was sickened with worry.

To get there in time, the poor thing had to hurry.

The doe rushed along in big leaps and bounds,

With a speed that could rival even the hunter’s great hounds.

I’ve smelled a wolf nearby, and he wants your young heart!”

The girl froze and grasped at her cloak

Then she turned with a whirl

Teeth white as a pearl.

She looked like a princess away from her palace,

Except for her voice, which was dripping with malice.

She asked with a smile.

The deer froze in her place, throat filling with bile.

There was a scream, and a crack,

And then all that remained were two golden eyes and the cloak on her back.

Some people tell tales of the wolf in the wood.

Some say that he was just misunderstood

Some say the blood proved what he did,

And that the woman he killed was really a kid.

But I know the truth of the wolf in the woods,

And us creatures that live there, we did what we could,

To help whom we thought was just a girl in a hood.

14 reads for this poem