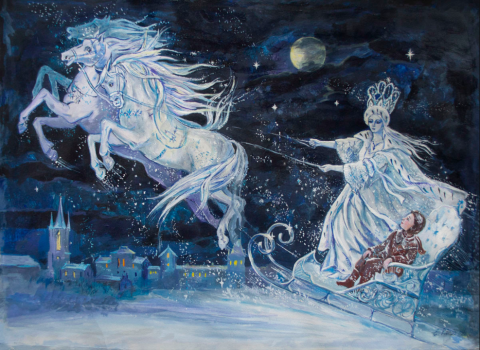 Once upon a time, there was a woman.

A princess of beauty, a lady of nobility,

A damsel of good-nature, a virgin of purity,

Were all fair titles she owned not.

The only title she claimed as her own,

Wore with pride and all respect,

For hours, her eyes rested upon her son.

Than that of him, gliding across the lake,

With rosy cheeks kissed by winter.

He skated on the winter’s mirror.

A beautiful boy, a snowflake, young and pure,

His laughter tinkling in the breeze,

The most wondrous music she could dream.

One second; all it took

To cut the bond of mother and son.

A silent scream, a disoriented dream—

she pulls him from the water’s clutch.

A smile frozen on his lips,

his blue eyes bright but dead as ice.

“My heart!” the mother wails,

tears sliding down her face so pale.

All around the snow bullets

Her skin, its bites turning her white,

Catching in her hair, burning her eyes,

Btu she’s blind to all but her only son.

She weeps, she cries, she curses the sky,

But there his body laid, a fleeting snowflake.

The winter winds freeze her heart,

‘Till it is dead as coal.

A prick in her eye; her tears crystallize

To beads of ice.

Now a queen—the Queen of Snow.

Through the lens, her icy stare

Looks to the lake that stole her son.

The silvery surface she trusted before

—a reflection of the death in her heart

and her truths of the world.

For the Queen, time was but cruel.

But then the snow bees buzz excitedly.

“A beautiful boy, a blessed boy.”

They tug at the Snow Queen’s cloak,

The bees beckoning their queen.

Out of her castle to a town

Where children played in sleds

And tended to garden beds.

As the Snow Queen looks about,

Memories stirred of a town

Where she lived once

With a beautiful boy.

The snow bees lead her to a house

And cluster around a window

Where a box of roses bloom outside.

She frowns at their thorns, their crumpled petals,

But then she spots a cherub’s face

And those blue eyes

Looking out the window,

And striking to her heart.

She breaths, and frost glosses on the glass,

Swirls and curls, delicate in their intricacy.

The boy smiles, and a single bead of ice

Rolls down the Snow Queen’s cheek.

A beam of sun shining through the ice.

THIRD STORY: A Ride in the Snow

Her sleigh was as hard as crystal to the touch,

But the color of new-born snow,

with holly wrapped around its rungs.

Gleaming in the light, a diamond from the skies.

All eyes were enraptured as she glided by,

But none approached the Snow Queen’s sleigh.

Her gaze passed them all—

Then settled on those blue eyes.

The blessed boy did not flinch

From her winter’s skin.

The blessed boy did not shudder

From her mien of ice.

He hitched on his sled,

And off they went!

Sliding through the town

and down the streets,

When she looked back,

Those blue eyes flitted about

But one shared glance,

Laughter tinkling in the breeze.

With the walls of the town behind,

The sleigh stopped. The Snow Queen

Went to the boy. Cheeks pale and lips blue,

He shivered. “How cold you must be,” she cooed.

She swaddled him in her bear-fur coat

Until only his head peeked out, his blues eyes

Watchful. A kiss on his forehead—

Another kiss, precedent the kiss of death.

The blessed boy giggled, so sweet a sound.

He looked up at her with no reservations,

Nothing but love and trust filled his eyes.

A bead of ice rolled down her cheek;

Her blessed boy, her beautiful boy, was hers.

Through the trees, across the land

They flew until they reached

The grandest jewel of all.

Moldings and sculptures crafted from ice

So fine, one could see the dimples

Of the cherub overlooking the estate.

Sunlight shone on every surface,

A diamond with millions of facets,

But not one drop of water, one melted bead

The Snow Queen led the boy inside;

The creamiest of ice creams, the freshest of fruits

Awaited him in crystal bowls,

All for him to yearn.

Through the rooms she led him through.

And a room just for him, with the finest sheets and gardens of frost.

The last room she brings him to

Has a frozen lake, smooth as glass.

“The Mirror of Reason,” she named it so.

“In it you can find the horrors of the world.”

But in this palace you are safe.

None can breach the winter’s walls,

Too frozen and harsh, too beautiful they are

For mortals to crack.

Here you will stay, my child;

Here my blessings will be bestowed upon you

In a land of only perfection,

She hands him a pearly box.

Inside are pieces made of ice.

“If you can spell ‘eternity,’

Then I will set you free.

You shall be your own master,

and I will gift to you the whole world

with its bittersweet truths.

All of this will be yours.”

He looks at her through lashes long.

“But why the word ‘eternity?” asks the boy.

“For my love for my son is eternal,”

she says, another drop of ice rolling from her eye.

He smiles at her, so heartbreaking she could cry.

Off to the warmer lands she goes,

Spreading the cold and the snow

Flakes; the berries blue and ripe;

And furry coats, new and white.

Once her job is done,

She flies into the sky

Where her heart rests

On pillows of clouds.

Their whiteness was soft,

A blanket, wrapped around her

Her beautiful boy, her beloved boy,

Drops of ice roll down her cheeks;

A blizzard blows on the earth below.

She stays with her beautiful boy.

When the moon could no longer wait,

Down she took her sleigh.

The blizzard’s bashing slowly turns to a breeze.

The doors of the palace swing wide.

Inside she can hear their voices;

She slowly turns into the room.

They’re on the floor, laughing,

Arms wrapped around each other,

But she peeled back the layers of the girl

And saw a monster, come to steal her son away,

Into a world where only tragedies await.

She could see them all reflected in the lake—

The Mirror of Reason.

With a gust of wind, the Snow Queen

Throws the girl against the wall.

The boy shoots up, eyes widening,

When he looks at her.

One glance, one hope,

That he’ll turn his heart back to her.

But the gaze breaks, and he runs to the girl.

He pulls her into his arms,

His hand pressed against her lips,

“By cheating!” she howls, sleet whirling

This girl is a monster, ugly and unfit!”

“She’s not! She came all this way

because I’m her friend. She loves me!”

with a mother’s love.”

He leaves the girl’s side,

And goes to the Snow Queen’s, holding her gaze.

“You have treated me so, so well…

Her voice is crackling ice,

With beads in her eyes.

“But have I not shown you a mother’s love?

We may not be bound by blood, but surely that?”

“Love should not demand fealty,” says the boy.

“It should be free. Look around you.

Everything here is frozen. Trapped.

They cannot begin to live

If you love me,

then let me live my life,

by my own heart and mind.”

She turns her eyes down

From those pure blue eyes

To the Mirror of Reason

And her truths swirling beneath.

What is life when everything is dying?

What is love when the heart stops feeling?

And she stares into those blue eyes.

Under the spring child’s touch,

They melt into water,

As clear as a cleansed soul.

A glass bead rolls down her chin.

Kai runs to the girl, holding her to his chest.

Her eyelids flutter, her breath a puff.

The Queen kneels beside the children.

As she caresses the young girl’s face.

She leans down, pressing a kiss to

From her skin, cheeks blushed with rose.

Her eyes flutter open, a smile upon her lips.

“Sweet child, I am so sorry.

Never again will I be chained by my forged truth.

The children smiled, and kissed her cheeks—she smiled.

“Thank you for freeing my blessed boy.

Thank you for freeing me.”

SEVENTH STORY: The Kingdom of Heaven

The Queen watches from her palace.

The water of the Mirror of Reason

In its reflection, she sees

The beauty of the world

And a man and a woman, with the hearts of children,

Earned their heaven on earth as they tend

to the roses blooming in their little box gardens.