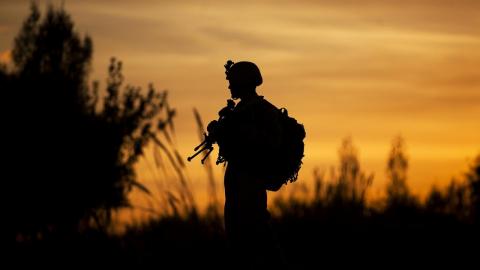 Darkness all aroundLike the waves on Death's cloak.Wherever one looks they simply see terror,Fear.It feels as if Death is ominously looming over,Mocking and laughing at the fragile nature of a mortal life.

In the distance gunfire sounds continuously.Loud, thunderous booms surround the area,There is no escape.The sky above darkens as sounds of propellers pass overhead.Though whether these pilots are friend or foe is simply too difficult to decipher.

Beneath the combat boots are red stained dirt,The soldiers are wounded, softly sobbing, praying to return home,Praying for the pain to cease.The image of loved ones' smiles giving hope to hold ontoAnd motivation to move forwardWhen the world as they know it is being blown into oblivion.

Suddenly cautious of the weight of the cold, black gun in your hands,As though it were being weighed down by the many souls lost on this dark night.The soldier next to you moves frantically,Loading his own terror into his gun.He gives one fatal glance your way before his body jerks backwards as Death closes in on himLike a cat claiming its prey.The visual of the dark, red liquid seeps down the forest green uniform,Absorbing into the ground and becoming one with the many other lost souls.

You know you can be next,Death is simply waiting for you to turn your back.You want to be home,You want to be with the one you love,And now you wonder whether this was even worth it.Was it worth it?

Eyes fly open with a start to blinding daylight,Your head resting peacefully upon a warm chest,The sound of a steady heartbeat.Gentle arms close around your body,Wiping tears from your moist cheeks, a concerned expression on their face.This is the feeling of safety as the both of you lay upon the sofa,An army application lying on the table,Yet to be filled out.Was it worth it?

This poem is about:
Our world
Poetry Terms Demonstrated:
Alliteration