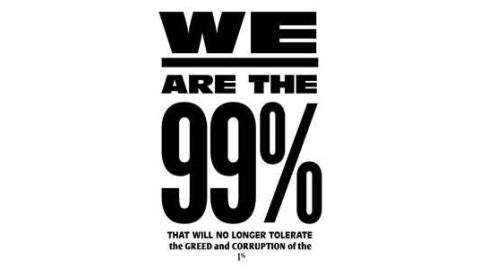 Walking within the microcosm of Wall Street,

One will find an extraordinary feat,

That of money keeping people going,

As if they used it for their own two feet.

And yet we have those who think the economy,

Is nothing more than a theoretical game,

Both providing us with a life all the same.

But some succumb to what money brings

That being the sins of corruption and greed,

Without planting another seed.

These are the wealthy one percent,

Dominating over us, nearly omnipotent,

Owning more than half the country,

Evidence of a wealth disparity.

The government too, that of our nation,

Has been influenced by many a corporation,

And this is why the ninety-nine percent,

Dare to occupy, to balance the equation.

So that everyone, in whatever case,

Can still have a chance to lead supreme

Have a chance to run in place,

Towards the American Dream.

Because it isn't fair that many are poor,

With opportunity a closing door,

While for the rich, these same doors are open,

That is why the ninety-nine will try

Amongst the passing businessmen,

To successfully reform and occupy,

The income inequality- but when?

When, when, when will we finally have stability,

Or is it that our struggles are of futility?

For it doesn't seem we have the ability

To instill in these politicians some humility.

They siphon us off of our money,

Running past us, without a care,

Us the turtle, the wealthy the hare.

(In this economic and social race)

And so the struggle continues,

That must dispel away this malice,

That doesn't consider our own views.

For this situation is indeed tragic

As the ninety-nine oh so struggle,

The wealthy having all the magic

An economic wizard, and us a Muggle.

We live in a world of duality,

Where an illusion is the state of equality,

Unless we make it so,

And fight this formidable foe.

One day we will see that paradise Elysian,

Where every leaf in the field is a dollar bill,

When nature was able to perform its will.

And now we have industry,

Taking over the precious entity,

Everything becoming controlled and mechanized,

Through the plans the wealthy so devised.

They ruin this country day by day,

All so they can have their own way,

Bombarding us with taxes, bills, and fees.

But one day this will all cease to be,

Once the struggling poor gain some respect,

And are allowed to roam in that Paradise free,

With their goals having been met.

Poetry Slam:
Slam on Wall Street
This poem is about:
My community
My country
Our world
Guide that inspired this poem:
7 Tips for Writing Poetry on Civil Rights
Poetry Terms Demonstrated:
Allusion