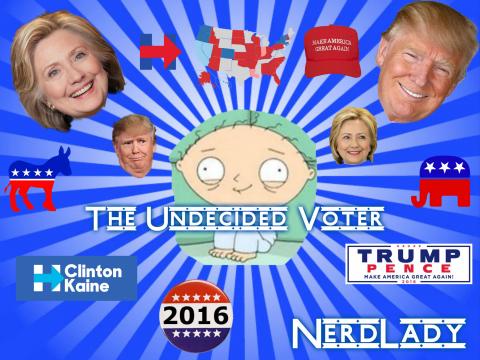 A radical Oompa Loompa or a Wealthy little liar…

Ah I can’t decide; I think my brain is on fire!

What about Jill Stein, she agrees with my stance!

Nah on other hand she doesn’t stand a chance

But then the GOP will be all like… He’s trying to take our guns!

but a reign of Donald Trump that’s like an insult to our nation!

We yell like crazy till our lungs beg us to stop

And then we take a step back and repeat from the top!

“Yo! It’s the youth, you know the one getting screwed!

Could you take like a five minute and listen to us too!”

Or did you already decide that our opinion does not matter?

Because if that’s the case then this is pointless chatter!

Speak up? Speak up! I’m trying to speak up!

Oh settle down, be quiet…. Shut my mouth…well

I promise you… I’m trying, but I just can’t right now!

I think I’m losing control! And with my thoughts on a roll

This political puppet show is about to take a toll!
The spices are being added to this giant salad bowl

You can feel the intensity as it dashes through your soul!

And yes I said salad! So toss away the melting pot

Because the smell is going sour, and it’s getting way too hot!

Stop assimilating us, I don’t think we fit in

The ingredients don’t match and the recipe’s too big!

Someone fire the chefs, and ask them to think!

Because where I’m standing from fairness does not exist!

And the authority claims thunder, but it’s as scary as a mist

It’s not hard hitting… it lacks power in the fist

When it comes to getting to the point – it already missed!

Hello puppet master! – Can we get some attention!

But then then I’ll get a conviction…

And pick up and addiction,

You may wonder why, but that’s just the system!

And the system we have… this system just doesn’t listen.

And right now I have about a million questions

Who are you voting for?

Will you benefit the rich – or will you help out the poor?

And what’s the deal with abortion?

Are all children sacred or do we need another portion?

Religion and Education… Should they be on the same plate?

Gosh what am I talking about – these sound like plans for a date….

But it’s not that simple! This rock that we are dropping

It WILL cause a ripple

Despite the simple fact… that it sounds like a riddle

Option A or B

I think that I’ll pass

Plus, it’s getting late and I have to get to class!

I just turned 17 there’s no need for this stress!

I’ll just let the current voters pick up this mess….

And if you can’t take the pain I suggest that you beat it.

This is the undecided voter… peace and I’m out

I mean… it’s democracy let’s be proud, let’s be loud

Don’t sweat it… that’s just the fate of the youth in your hand right now!

Poetry Slam:
My Year in Poetry Scholarship Slam - CLOSED
This poem is about:
Me
My country

Nice. Glad somebody said it.

This is AWESOME! Thank you for putting it out there :)

Thanks! It's the insanity that halps me write lol.

Great poem!  Thank you for your honesty. :)

Even though I disagree with your stance, this is a very well-written poem, and it was a joy to see such thoughts displayed in an almost lyrical matter. As I read it I could feel your poem's own rhythm come out. Keep writing.

Thanks I'm glad you liked the style.

87 reads for this poem