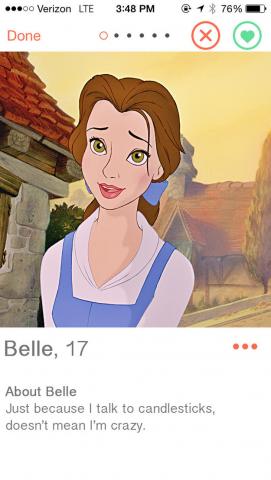 Beauty and the Beast may be

A tale as old as time,

But when adding in apps like Tinder, we see

How it fits the modern dating paradigm.

The prince spent his night

Until the morning hours,

Inviting any dime he saw up to his royal towers.

In the middle of the night,

There was a knock on the door.

The prince hurried over with delight.

However, outside stood not a ten… but a four.

Upon seeing his guest, the prince’s lips drew back in disgust.

He spewed insults at her and deemed the whole charade unjust.

The Royal Pain went to slam the door in a face that didn’t resemble the profile picture,

But at that moment, it became clear that he shouldn’t have tried to ditch her.

With a flash of light and shower of glitter,

Though her face was beautiful, her expression was bitter.

Before the prince could even apologize, she pulled out her magic wand.

The prince became a beast only beautiful as his heart.

The only solution to his curse was finding a girl, kind and smart.

The words, “Learn how to use photoshop,”

Soon the beast realized the Enchantress’ advice was great

And searched for a girl resembling the before picture of Cinder.

To do this, he lowered his standards from ten to eight

And went back to swiping right on Tinder.

He updated a new, truthful picture to his account.

Honestly, this caused his matches to lower in amount.

Finally, he came across a girl named Belle.

She seemed kind but was also a lovely mademoiselle.

The beast was first to slide into Belle’s DMs.

Though his replies were often dry and late,

And the two promptly scheduled a date.

The date quickly went from Disney to Grimm.

Belle realized her date was rather dim.

He went on and on about his ex

And bragged about how good he was at… listening.

Do not confuse Belle’s kindness for timidity.

She outright addressed the beast’s flaws,

Fearless of any acridity

And knowing her harshness was for a good cause.

The beast was immediately overcome with rage,

But he then remembered the curse that trapped him in a hideous cage.

It was then obvious that Belle was the cure.

Thus, the beast decided he must simply marry her!

Along with visions of chloroform and being tossed in a pickup truck.

First most, Belle was smart before kind,

So she dashed out the door with a final “Good luck!”

Poetry Slam:
Once Upon a Poem Scholarship Slam - CLOSED
This poem is about:
Our world
Poetry Terms Demonstrated:
Rhyme Scheme

74 reads for this poem