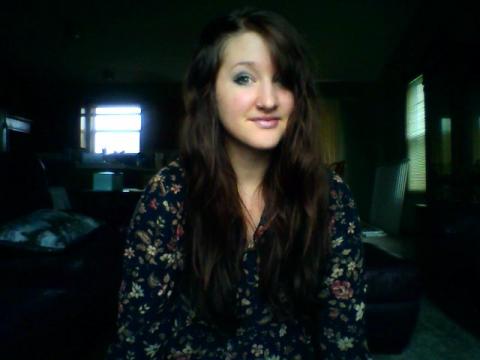 This area is accepting of so many things

and her grandma and father tell her "Go play some more, no, I don't care if you're tired; you don't need a snack."

She gets older and goes to school and gets mashed potatoes with gravy volcanoes nice ladies with hair-nets pass out
She licks the plate clean and teachers shake their heads in disgust, wondering sadly how terrible the fat little girl's parents must be at raising her.

She spills on her shirt,
shrugs it off and runs outside with her best friend who is thinner than her
but she eats just as much
and she starts to get confused
why don't the teachers shake their heads at her, too.

She gets older and girls start dating boys and buying tight clothes, but those things don't look the same on her

She smudges black over her eyes hoping it'll act as camouflage

She hides in her closet when her dad yells, digs her fingernails into her arms, shrinks until she disappears.

She finds the diet pills her sister shoplifted and wonders why someone so beautiful needed those (does she feel how i feel).

She goes to high school and takes dry lettuce from scowling women
no more mashed potatoes or smiles.

She's congratulated ten times a day for how great she looks
then she goes to the bathroom and sticks the dryer down her dress just trying to force some heat on her bones; her lips are always purple though she doesn't wear lipstick
She coughs up blood and it hurts to lay down without any cushion to protect her jutting out hips and cheeks
Her knees are shaky and its getting harder to walk upstairs, she wants to take the elevator
but that's for sick people.

Her hair falls out in clumps without any provoking so she stops combing it;
it hurts her head anyway.

She falls of the treadmill a couple of times, but no ones embarrassed of her in pictures anymore
not even herself
She's still convinced they're photo-shopped though
She's not that thin.

She makes the musical, but she has to sit through most rehearsals
she is too dizzy to dance.

People ask her why she never hangs out anymore, and her parents get angry when she doesn't eat out with the family
but her prom dress looks perfect on her

She goes on spring break and her father screams that she looks sick
and she thinks back "good."

Her sister-in-law tells her its okay, she went through this too.

She goes on a mission trip and confesses to one hundred and fifty people that she has an eating disorder.
A soul-sucking, life-fucking, leeching monster dragging the goddamn beat out of her heart.

She collapses on the ground and beats on her chest which has started heaving because of the truth which fled from her body right between her lips.
My God, what has she done?

One hundred and fifty people come up and tell her they knew it, they're so sorry, they should have said something to stop her.
She's comforting them.
(where were they when everyone was congratulating)

She eats just enough and gains just enough to stop the questions
She goes on dates but breaks every one off; she's already in an exclusive relationship.

She goes to college at the community school because she is undecided and distracted
Sick Girls can't have a normal college experience anyway.
She'll never get drunk in her dorm or stay out too late with her friends and pass out on their kitchen floors from laughter
She's too busy learning how to be a person again.

She gives up her chains and steps into recovery.

She stops taking pictures and covers all her mirrors;
Everyday is a fucking marathon of forcing herself to eat and re-training her brain what she should really be afraid of
guns and snakes and losing loved ones, not bread and sugar and bathing suits.

Her stomach starts to get soft again, whether or not she was ready for that.

The past four years have clouded her mind and almost stole her life, and now she's left to deal with the damage that led to the disaster that became her teenage rebellion.

I wish I could say she was healed now
and laughs at her demons
but see recovery doesn't have a day off, and it took her four years to descend into this madness;
it will take at least that long to climb out.

One thing I know
She's stronger every day, though she may waiver
She stares herself down in the mirror and sees (proudly) the strength that clawed itself out of the grave and took its place there.