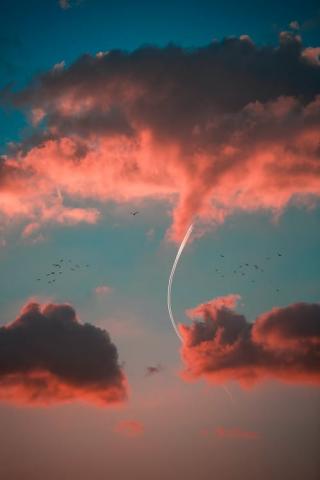 THE SIGNATURE OF THE SKY

The sky is sombre grey,
as thirsty for the hue of salmon pink that hovers over the mountains,
The dusky grey peaks give the bottom a jagged edge,
Whereas the clouds above soothe it with charcoal swirls,
With a thick blanket of fog hovering thirty feet or so.
Branches newly bereft of leaves stretch up toward it,
Disappearing into the white as it's their escapades escape tips Low and dark,
with the thick cloud, mostly grey,
Waiting for the setting sun to give it a perfect glue of ray!

Now, it has a smattering of low level spell cast clouds,
spread-out to blaze brow,
The milky cotton ball of clouds obstructed portions of the encompassing sky's show,
To give a theatrical appearance of its infinite beauty,
darkened to the horizon despite vivacious glow:

As the sun slowly settled in a magnificent flourish of ribbon-like attire of orange flow,
Only to baffle us with it's omniscient vastness,
stretching out of infinity beyond our fancy to quest ;

Yet it seemed to capture every minute of our unacknowledged thoughts, our dreams;
As it's communicating in a way that it would seem piling the rattling of striking thunder & lightning!
It sometimes appears smiling and speaking softly in the first rays of dawn;
At night, in its infinite beauty,
when the glittering stars in the Luna's light by fathoming darkness, Comes out,
of their curious hiding spots and winked to collaborate the unknown!

The whimsical clouds in a partial canopy,
playing hide and seek as part if their countenance;
Captivating the pools of sunshine streamed through,
leaving an infallible heavenly glow below,
As with angels planted in Hawthorne Bowers and God himself in passing hours!

Devoid of all sounds,
ominous looking clouds,
a silent champion stealing the light,
To stir the puff of the visible mass of condensed water vapour floating in the sky;
Deceptive, as it appears jovial outside, as rhinestones glistening for open eyes!

With clouds, light and wispy like sea- foam cladded,
yet translucent like sea-glass As ascending abyss,
the vacuous sphere,
the paradise sky reflects,
the unfathomed very being of our existential fanciful flights!

The gauze like clouds float in the sky,
seems to hide the ethereal fairyland of the palace pavilion:
It was the zenith of promise of life in the darkness,
a sense of warmth,
A sense of warmth springing from the cold as slowly glide,
To capture a signature with the earth to appease the pair of sterling eyes with its luminous sights!

When pen is honoured there is nothing like that! Thanking!

And the evaluation is as amazing. Thank you for the applaud

Sorry- This is more than a poem*

More than the mystery yet unfathomed!

Is is so amazing

keep up with your good work

Thanks in abundance! it's inspiring!

When ever I read your poem I can actually feel it. Your work is always excellent

Just wonderful! Regards for the honour bestowed on the pen

My regards sir for the acclaim! It's indeed inspiring!

By glorifying you motivate to pursue more!

What a depiction. Matchless and unbelievable. You are undoubtedly one of the best

Regards for that matchless evaluation too!