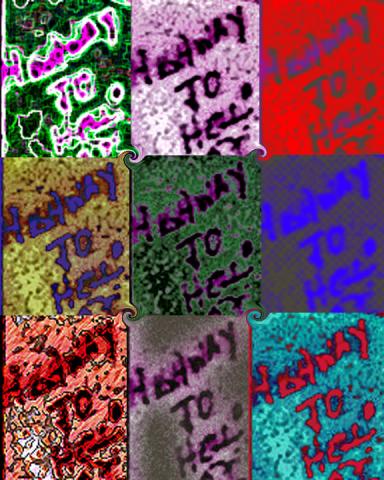 The lines drawn without embellishment or

The possibility of such an accompaniment

A room filled with absence and the

Sense that suffocation is possible-

Is in fact likely-

Of isolation where colors are so vivid, dissimilar, and devastating

That mixed they cancel out and

Stretch themselves into angry, sullen figures that stalk tangibles far after the

Moon, pale and sweating with anticipation, smiles and mounts the dark stage

Whispers collapse and shoot down streaming banners of phony reassurance

What you guess knowledgably- what you know-

Are teeth, rotting and jagged and you wonder

Glaring to induce a tremulous dance which

Staring, your skeleton learns and reluctantly steps to

In a neon ballroom smeared with spasms masquerding as oriental rugs

Screaming and tossing its dense matted mane under the weak floorboards

Realizing that the end is close-

Close enough to feel, like ambling briskly through arches of shocks meant to prepare

And twist the well-worked wires of the panic apparatus

The itch is deeper than you comprehend; an explosion is peeking from the vase of possibilities

Snails of death and delight and thrill, but above all fear

These emotions cease in the end, are shot down one by one all of them on the spot

You peer from behind thick sheets as they utter their last prayers,

Asking forgiveness you will never deny