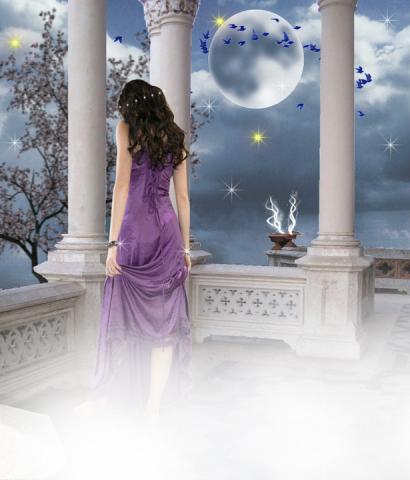 Long ago, in the ancient days;

Whilst the nights lacked the moon herself;

There lived a girl with wildest hopes,

Than any spirit could envisage.

Her life witnessed a great difference,

That altered her and her world;

But what happens here is no bummer,

For everyone trusts the ultimate truth.

Rousing herself from a deep reverie —

Amidst a cold, eventful gloom —

She gazed beyond the balustrade,

Her mind upon the dream she saw.

Her fantasy witnessed dawn himself,

Descending down his shining throne;

Drawing himself to his fullest height,

Revealing all he kept inside.

She dreamt about his tender days,

The soul beneath his shining mask;

Without a flaw, without a doubt,

The dream rendered his supple soul.

She saw her destiny marked in him,

Upon the angelic soul within;

'Twas neither his pretense nor demeanour,

That engraved her faith truly in him.

She tranquilly waited the night to end,

To watch him ascend his mighty throne;

To see the robust swish of his cloak;

And to lose herself in his angelic smile

Strength found him as days passed by,

Brought about by her steady worship;

He now had her certitude replete,

As she gave him her mind and heart.

But prizes consort a fatal flaw,

And his prize had it all the same;

For although he had her selfless love,

He chose to leave it untouched.

The recurring dusk tried in vain,

To rob her off her trust in him;

But her steady prayers and flawless dreams,

Confined herself solely to him.

Who envied her brimming happiness;

And now thought of an efficient way,

To estrange him from the heavenly love.

Straight from the roots of the celestial stars;

And thrust it down the deep waters,

Where it lay glittering all night long.

The girl now leaned on the balustrade,

Waiting for her enchanted dawn;

When she took in the glittering form,

That enlightened the darkest gloom.

But she fell into the hands of sleep,

As her dawn refused to approach;

And the dream she saw on that cold night,

Filled her with unwanted surprise.

It now rendered his present self,

And his wild and deep, brimming emotion;

For all his fervor now rested,

Upon the glittering form below.

Another jerk, the girl woke up;

Amid the tears cascading her cheeks;

But nevertheless she felt happy;

For happiness was his present state.

For so strong was his love;

He stirred and squirmed in his mighty throne;

For lust now enchanted him all through.

He lolled around in deep angst,

And then disdained his daily chore;

He hastily reached the glittering pond.

The girl shadowed his eccentric mood,

For he was divinely happy;

Oh! That made her lose herself,

And drift away, to another world.

Meanwhile, down below he anticipated

The form beneath would surely be his;

And disregarding her silent prayers;

Launched himself into that evil pool.

The nights grew cold for it lacked the day;

And his celestial power all the same;

The land fell in complete disarray.

To all the Gods she’d ever known;

For she needed his heavenly warmth

His shining self, his smile, his laugh.

She cried ‘Take me and give him, please!’

He’s nothing but my enchanted dawn,

The world needs his heavenly warmth,

Reveal thy angelic self instead!’

The merciful Gods took in her prayer;

And lifted him from down below;

Gave him back his mighty throne’

And then punished the rueful dusk.

The girl would now serve the night;

Whilst being his eternal wife

For she’s none other than the Mother Moon,

Spreading luminescence all around.