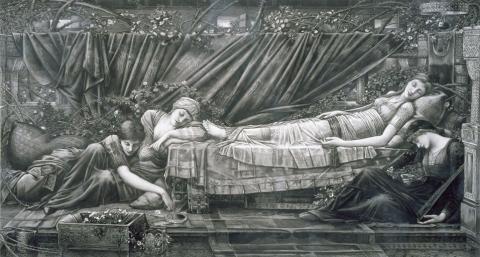 On the day of Briar Rose’s seventeenth birthday,

As the curséd fairy had said,

She pricked her finger on the spindle,

But many do not know the truth behind this story…

Long ago in a German castle,

There lived a young girl with beautiful blonde hair,

Who was, as some say, a bit of a hassle.

But her hassle was not her doing,

For, since birth, she had a serious condition,

Of which she did not have a clear construing.

On the day she was born,

Many Fairies arrived to speak over the girl,

But one fairy spoke something quite forlorn:

“On the day of her seventeenth day of birth,

She shall prick her finger on a spindle,

And bring about her death and a day without mirth!”

But this girl was invariably protected—

By fairies dressed in white and very well respected.

So, her parents did not fill themselves with worry,

Nor did they feel fear for their daughter’s life;

She would be guarded by the good will of every noble fairy.

She remained inside the castle,

Away from the outside world’s viciousness.

As years passed, the girl was as healthy as ever,

Despite her juvenile illness.

On the day of her seventeenth birthday, however,

She was discovered, unconscious,

Lying on the floor of her chamber.

Shocked and in disarray,

Her parents, along with the fairies,

Placed her on her bed.

Impatiently, they awaited the physicians’ response,

For despite their wealth,

The family had no medical insurance.

But no word was said,

So, they descended the steps,

Praying the beautiful girl was, indeed, not dead.

Arose from her bed and made her way to the attic,

Up the steps of oak.

With a turn of the head,

The fairies heard the creaking of the old,

Let her not prick her finger! cried her mother.

Let her not die! cried her father.

Let her be alive! cried aloud the good fairies and every other.

But as the fairies and the family burst into the room,

They happened upon not a lifeless girl,

But rather a healthy one crying out sweet prayers as a flower in bloom!

She had pricked her finger,

But through a fairy’s most insincere intentions,

She had also discovered her blood pressure,

As well as her blood glucose levels.

And so, the beautiful Briar Rose did not die,

But rather she found a new way,

And a far simpler solution for checking

And managing her blood pressure and glucose levels.