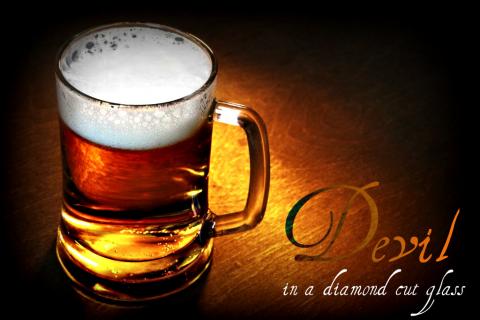 I know fear and loathing

Its bitter taste causes the tongue and conscience to cringe, but the body to weep in its absence

Truth is distorted and the world tilts on its side, the concrete meeting your head long before the pain does

So much is dislocated; more so than just an arm or a leg, much more than anyone on the outside looking in could possibly comprehend

I call it liquid terror

Devil in a diamond cut glass

Our home was plagued by its presence, inherited by pain and nurtured by denial

Distortion made itself known through the broken hinges of cabinet doors, marring the perfect nuclear family that we were

Cars once cared for were left to rot on our gravel drive way, they too broken by time and neglect

The man that was my father had been seized by the monster of his creation, this inherent disease founded by his father and his father before him

Grief wells in the pit of the stomach, bubbling and churning until the inner workings of our biology grind bare bone to dust and souring all that we once thought was good

I held him in my hands, against my hip, to help bare his cross

When he cried I wept twice as hard, praying for miracles that were never to be

When he stumbled I caught him

When he fell I was at his side, calloused palms holding my own as if conveying his cry for help

I remember those hands, sturdy and blackened by his occupation

On my knees I scrubbed the dirt and filth from my person, washing away the enigma and disconcerting myself with the very toxin he couldn’t live without

His resilience was my inspiration

His son, his wife, and his daughter were his reason for living, for functioning

His disposition was our wellness, our success in life

My parent, my idol, held me high with blistered hands so that I may not sicken myself with his own crippling disease

At his bedside angels tended to his weakening body, long hours spent in pulling a desperate man from his despair

But the Devil was close at hand, stalking his bedside in order to lead him further astray, far from our caring hearts

Those sturdy hands once strong held my own demurely

Then, like a thief in the night, his savior freed him

The bonds that once chained him to this existence shattered, falling to the ground with such an echo it could have been heard around the world

My father had been saved and his suffering forever ceased

Word reached me in the early morning hours, when the earth and its demons were fast asleep, that my father and his savior had escaped this world together

I wept for joy

He was peace and so were we

I carry on his legacy

I am survivor of addiction, of a broken family, of busted cabinet doors and broken gravel drive ways

He made it possible for me to survive in this world, to fight the good fight and never back down even in the face of imposing adversity

This poem is about:
Me
My family
Guide that inspired this poem:
5 Tips for Writing a Free Verse Poem
Poetry Terms Demonstrated:
Imagery