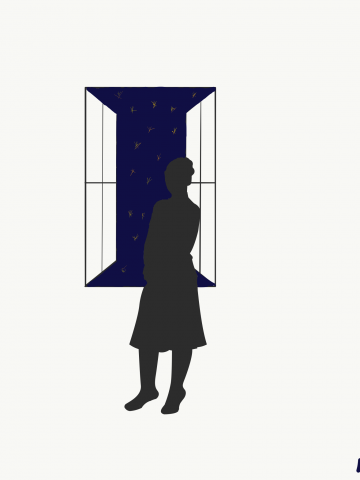 A mother tucked her little boy into bed.

She sang him a lullaby, she kissed his head,

She opened the window and slipped out the door

Closing it quietly behind her.

That mother woke up to a creak or a breeze or a feeling.

Peeling blankets away from her body,

She rushed down the hallway to check on her boy

And he was gone.

That mother slept in a little boy’s room

With an open window and a tearstained face.

Every night, she asked the stars to keep him safe.

Tinkerbell flew through an open window.

She found a little boy curled up in his bed

She looked at that sweet button nose

And the long lashes floating above little flushed cheeks.

She landed softly on the little boy’s head and said,

Peter Pan woke up to Tink in his curly-cue hair.

When she told him of a place he would never grow old,

Where he could nap on clouds and live uncontrolled,

Laugh with the stars and stay out after dark,

He burst out of bed with delight and said,

“It’s off to Neverland for me!”

So once upon a time, as the story goes,

He never grew up and he never had a care.

His life was one of legends.

Of the mother back home still waiting.

She spent every night in a little boy’s bed

With an open window just over her head.

She waited for years and he never came back.

And every night, when the sky had faded to black,

Peter’s mother asked the stars to keep him safe.