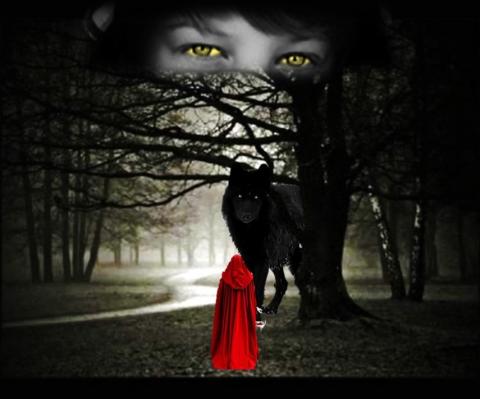 Everybody runs when they see my black charcoal coat of fur.

Everybody runs as they see me stalking the streets late at night.

When everyone should be asleep.

When everybody should be,

Everybody runs as they see my razor-sharp teeth so white like the falling snow.

Everybody runs as they see a gleam of gold thankfully caught by the moonlight.

My golden eyes full of murder and death.

Everybody runs away from me.

Without a second chance.

Without a second glance.

Just fear in their wake.

Why aren’t you running away?

Don’t you know who I am?

I am the Big Bad Wolf!

The one you should be terrified and running away!

Without a second chance.

Without a second glance.

Just fear in your wake.

Why should I be afraid of you? Of someone like me?

I never understood her then,

As I saw her walking and humming a song under her breath to her Grandma’s house.

As I saw how the sun make her skin glow and the ripples of waves on her back rested against her red cap. So, red like the blood against her black charcoal hair.

As I played with her hide and seek.

As I laid down with her in the cold wet grass looking at the infinite sky.

As I held her when she cried a river of tears when her father died.

As I broke apart inside when she said if I was tired of being looked with so much loathing in their eyes.

With this affection, I began to understand.

To understand when she said I was only a boy who was sadly misunderstood by the people.

When I was only a boy trying to be someone who he is not.

A boy with black charcoal hair and golden eyes just like her.

Not a wolf at all.

Gave me a second chance

Friendship and love in her wake.

Poetry Slam:
Once Upon a Poem Scholarship Slam - CLOSED
This poem is about:
Our world
Poetry Terms Demonstrated:
Repetition