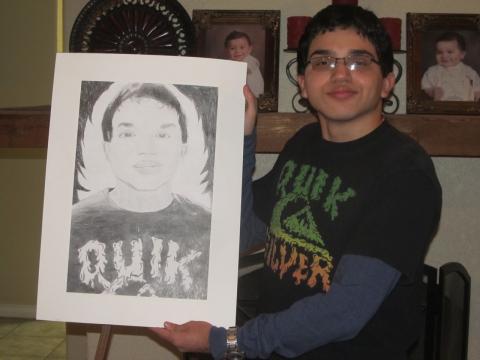 It’s okay to be a critic if you’re trying to be honest.

But I don’t want your crap now I just wanna be an artist.

Construct these fine rhymes that I fit between the lines

And the images I draw from out of my dreams

Don’t need any changes, they’re fine as they seem.

Now why don’t people take this philosophy to heart?

Well to put it quite simply they don’t know where to start.

So many fake images used to lie, cheat, or steal.

With so many of these fakes how do you know what is real,

When the people right behind them have forgotten to feel

The real deal of what it means to stand by your ideals?

Back when I was barely a high school freshman

I was thrust to a life of social tension.

“What should I wear?” Who cares. There was no problem there.

Yet I still keep worrying about these social affairs,

As if there was anyone that would actually appreciate

Some scrawny little wimp who wouldn’t dare to deviate

From the norms that people set in order to validate

Their judgements so their ego’s pain gets a chance to alleviate.

Trying to make other people seem like less than second rate.

These judgements aren’t harmless if they still generate hate.

I first realized this during a moment of self reflection

And since I’m opening up, this is important to mention,

As I was steadily staring into a “second dimension”

I could sense in my eyes all of my emotional retention.

As I look into the mirror, what sort of sight do I see?

There’s a man in the mirror and he’s staring at me.

His forehead in wrinkles and a serious frown on his face

Growing bitter and older at a young teen’s age.

No signs of innocent joy or hormone induced rage,

Just a blank stare looking deep into a blank space.

I decided to take his image of frustration and repression

And used it for some venting through artistic expression.

He didn’t seem to mind as I drew his outline,

In fact, he seemed to be becoming more benign.

And for some odd reason it seemed he started to smile back.

And that when you’re by yourself, it doesn’t mean that you’re alone.

So long as you express yourself and keep yourself true,

You can always find that person in the mirror smiling back at you.