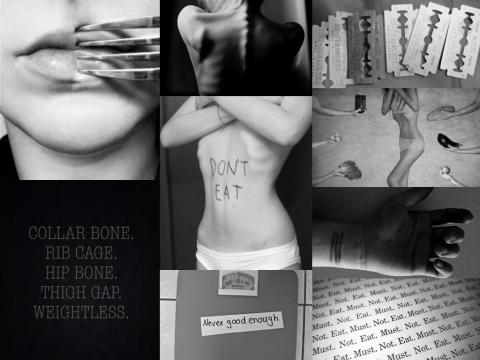 There are so many places you can go and look for thinspiration, fitspo’s, and bonespo’s.  There are so many workouts you can attempt to do to soothe your insatiable need for more. There is a never ending supply of water to replace all the foods you have restricted from your mouth. There are always new scales and body tape measures to give you numbers to frown upon. There will always be an entire land of struggling, battered, aching winter-girls stuck in the blinding blizzard of hunger, you among them.

You always stand in front of the mirror beating yourself down until you are nothing more than a scared little girl hiding behind your porcelain bones constructed on a wire frame. You’re so scared of the voices that made you want to tear yourself open to make them stop. You’re scared of eating. And you feel next to nothing when you step on the scale. 128… 125… 119…116…112…107…105…99…95…92…87…83! You watch the number dwindle down with the hair falling out of your scalp. Never to be satisfied with the number on the scale, never to be enough. You have been blinded with the many pictures of skeletons made into gods and goddesses. You have been fooled with words like “thin”, “pretty”, and “perfect”. When all you can feel is your heavy heart weighing you down into the deepest depths of your seas of affliction.

You can now only feel the curve of your hipbones, the bumps of your spine, and the rungs of your ribs where the body shaking pain crawls out to escape you. You run your fingers over them when you’re praying for smaller jeans and to lose ten more pounds because you can’t withstand the small bowl of tomato soup your mother forced down into your pink squeaky clean stomach. Because for you, your stomach grumbles are applauses for skipping so many meals and the blood that runs red from your arms and legs are worth every pound you lose.

But fuck you Ana. Fuck you for withering away into nothing, and ruining the lives of those around you. Fuck you for fooling me into thinking that I can never be enough until I end up like you, withered away into a big mess of nothing, with bones piled up on a hospital bed and scars running up and down my arms as I take heaving breaths to survive. Fuck you for making me compulsively count my calories, saying I don’t deserve to eat. Fuck you for not letting me stop, no matter how many times I begged, and now I can’t stop. We were the only people we had, you only had me and I only had you. The only thing we could hold onto. I was so stupid for letting you barricade me and trap me into a deteriorating downward spiral of self-inflicting harm and bitterness. I can’t even begin to explain my disgust and fervid rancor for you and what you do, not just to me but to anyone who is vulnerable to fall for you and your toxic lies and tantalizing laughter. So Ana, tell me what it’s like to be you. Tell me what it’s like to ruin lives to the point where I don’t have anything more to live for. Tell me what it’s like when you twist the knife in someone’s back. Tell me how you can sleep at night knowing you make me stand on that scale and taunt and ridicule the numbers that appear, as if I didn’t already hate myself for eating. Tell me how you live with yourself knowing you’re a cold blooded murder.

You dug your own grave with a long handled spoon, the same spoon you were fed glass dreams with as a child; the glass dreams that ripped you from the inside out. You and I both know much too well how agonizing it is to be the daughter of parents who can’t see you, not even when you’re yelling and stomping in front of them. I know what it’s like to drag that sharp object across your skin, because everything is too much, you feel too much, you think too much, everything is simply too much. And you don’t know how to deal with it, no one ever taught you how to appreciate the air being exchanged in your lungs, no one ever taught you how to smile simply because you are happy. No one ever taught you what love was, and that is why you are the way you are. That is why you are Ana. And I know what triggers most of your life-threatening earthquakes. I am familiar with the demons inside of you; because once you were gone you left those to me in your will. They are the ones that I now battle against every day. It’s always a never ending battle for us isn’t it?

And it’s much too hard to look in the mirror without wanting to beat it to shards with your own two boney fists. It’s much too hard to recover because everyone mocks our illness as if it were one of the funniest jokes. But we don’t find any humor in it, but we never have the willpower to speak up because we spend all of our strength on trying to ignore the hunger that slides its hands around my neck in a death-choke. It’s much too hard to be in remission when you care too much about everything but care about nothing at all, when your sadness never leaves, when no one knows what you’re dealing with because you won’t let anyone in. It’s so hard, and you don’t want to do this anymore. Your eyes shone so bright Ana; I wish I could’ve saved your light instead of putting it out with my own. You lay to rest, because your lungs want an endless nap, and so does your weakened heart. You just want to be okay, so you lay to sleep without fear, and as you drift off into an addicting darkness, you know you have lost, and won only yourself the wintergirl trip, too bad you were already hellbound.

You lost Ana, and I won.

(winter-girl=someone who is suffering from an eating disorder)