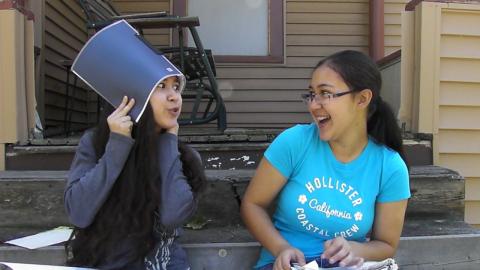 It takes about four seconds for silence to become awkward.

Four seconds to break the rhythm of this conversation.

Can you imagine what else I could be doing in these four seconds?

I could eat a bag of chips.

Put chapstick on my lips,

Review my latest texts, slip on an itchy dress,

Or wash my dirty face, say hi and then embrace,

Change the channel, miss a step,

Harshly fall, break my neck, get up and then lay in bed,

But I am here.

In this break in the conversation

For these four seconds.

Where I’m the star of a cringe comedy,

And then I’m saying,

And a simple, “I agree” initiates a game of chance of odd motions.

A head nod transforms me into a crazed bobble head.

Agreeing with what they said,

I put my thumbs up and wave them around

Until I learn they find that gesture offensive and place them down.

My hands give a toonish clap, then flail to the moon and back,

I do some sort of dance, I look like I’m entranced,

I smile with my gums, my fingers do the runs,

I quiver at the mouth, and when I get too emphatic,

When I decide to take out

The conversation picks back up,

But I’m too worried about having possibly slapped them in the face to listen to what they just said.

I receive a blank stare

And the cringe emoji is still there.

They just said that yesterday their cat died at age eighteen.

Well, I skedaddled with the grace of a herd of cattle.

But I think to the other times. It’s hard not to.

Like when my sneeze showered in a stranger’s stew.

And even though I may break out in hives

At less than opportune times,

I don’t want to become allergic to myself.

So I soar to the address

I realize these situations are less than dire

And even though I may nervously perspire,

I refuse to let a less honest version of myself for hire.

Because those four seconds of silence are where I find my voice.

I’ve been strapped on the hood of a metal conversation

Its wheels spinning at the rate of a moving crustacean.

Duration and sound are completely shut down

And my lungs collapse from a lack of oxygen

And the light at the end

Is a cardboard cutout

And though I many trip and fall, misspeak, and increase my breeding -

I dream of my escape until it becomes lucid

Where my choices are recruited

I laugh, I giggle, I poke fun at the tiny pains,

At myself until the upturned cheek muscles are hard to sustain

Until I can put these moments in a poem and be okay with it.

Because if it’s awkward, I have a say in it.

Because savoir faire doesn’t fare well when learning how to be aware and take great care of the self.

Because a lack of discomfort is unwise and ill advised if I make my prize the next, immense risk.

Because it’s absurd to dwell on the awkward.

Because the awkward is merely a flock of birds.

Like, when they pass overhead they’re only there for a short period of time and you’re scared for a split second when you realize that if they all pooped on you at once it would be equally as worse as that time when you tried to compare awkwardness to a flock of birds, knowing that your other option was “mock turd” and continue to explain it hoping to not be misunderstood, and also knowing that in doing so, more confusion will be spurred.

But in the end, four seconds is not quite that long

And if I break the rhythm with it, that’s fine.

Because it’s not a perfect song.

Poetry Slam:
Everything is Awesome Scholarship Slam - CLOSED
This poem is about:
Me