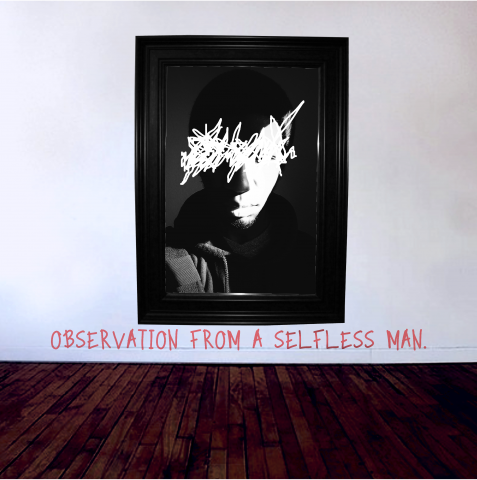 That I wake up and put myself on the back rack,

But it’s definitely not that.

When I wake up

I look in the mirror

past the dried slobber and nappy dew

I look at the boy too misconstrued by society,

too tired, too exhausted,

too consider his own variety.

Then I was back to reality.

He’s not your everyday man,

He can’t stand himself,

But he’ll support the land

Of which his peers walk on.

His shoes beg him to stop.

But he doesn’t listen.

He’s just a boy in a scary world.

But he’s an arms dealer.

to take in whoever needs healing

He’s got a feeling

that this world ain’t got much left.

so he counts his steps,

It’s more than a number.

It is the ending and beginning to a test.

18 testifies that he made it past puberty

That he took on the bulls of his age

He faced problems head on

Put his fist up, went fisticuffs with depression

He went mono e mono with his demons

But he’s nowhere near the last round.

If he’s knocked down, he’ll get up himself

He’s not depending on the world to solve his issues.

He’s not waiting for a box of tissues,

to wipe off that blood sweat and tears he’s poured

Nor that grand finale, the one centered on that big box.

When his finale does come,

But he is a river of sympathy

He will leave a legacy

That hopefully tells his friends and family

That he’s not gone.

That I wake up and put myself on the back rack,

But it’s definitely not that.

and I live in a giving world-

which gave me the character I reflect-

and I live to give back.

Thank you, means a lot.

I love this very much

I'm glad this came to your liking. Hopefully I can keep satisfying readers, and inspire writers.

My favorite lines are

But he is a river of sympathy".

Thank you so much, it brings joy to me to hear this. Also I would also like to know what in particular do you like about these lines, input is always valuable to me.

This is really good! I ewally liked it as well as your picture! #reflect

It's funny because the I took a picture of a frame  in my livingroom, the pic was from my phone's VSCO library. It kind of represents that box we put ourselves in to define us, when we are so much more than that.

This is really good and I think a lot of people can relate and may be able to realize that it's about what you give not what you get.

I agree, I hope people understand you don't have to wait until birthdays and holidays to give. Even a little hello and smile to somebody is a gift,

This is wonderful! V

Thanks so much. i'm glad you enjoyed this! :D

It means so much to here this.

I love this awesome job.

It's just some of my legible thoughts. Thanks :D

Incredible...Honestly! Your words captivated me