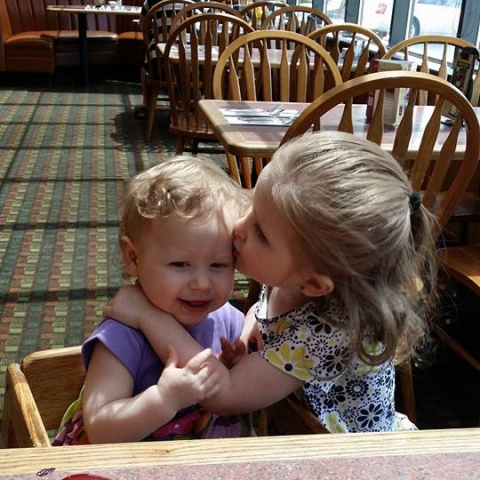 I have two nieces:

As a young woman who grew up in a household of only boys,

Living with them is remarkable.

As an active feminist who likes to see change in the world,

Watching these girls grow is humbling.

One day Hayden ran crying into my arms

Because I wouldn’t let her watch TV

(Her parents wouldn’t let me let her),

And I told her

And I wanted her to do a million things,

But right now watching TV just wasn’t one of them.

I never call her “pretty”.

She has loose strawberry blonde curls

And the brightest smile in the world.

But she will realize one day that she is pretty,

Or perhaps someone else will inform her,

So I don’t want that to come from me.

I need to make sure that she will understand

That she is a million more things

Behind her pretty face.

Little Anabel is the definition of energy;

Having just learned to walk,

She makes it her mission to be everywhere

Even if it will terrify her.

When Hayden decided to be a Mega Force Power Ranger for Halloween,

We thought for sure that Anabel would be scared

Of her sister’s shiny masked costume.

But Anabel loved it,

And my heart swelled.

But she already thinks it’s cool,

And to me that’s progress.

I want Anabel to grow up thinking that it’s normal

For her older sister

I want Anabel to see her cool big sister

And never think that there is a limit

To what she can enjoy.

I don’t want Anabel to look at the pink aisle

And think that this is where she is

She can sure as hell be there if she wants,

But I will never force her to be there

I was forced into that aisle myself,

And I have been struggling

With who I am

I don’t want to force my nieces

Into what I want them to be,

But I do want to give them countless options

So they have choices.

While I was rarely given options myself,

It makes me swell with pride

To watch these girls grow in a world

Where they can have no limits.