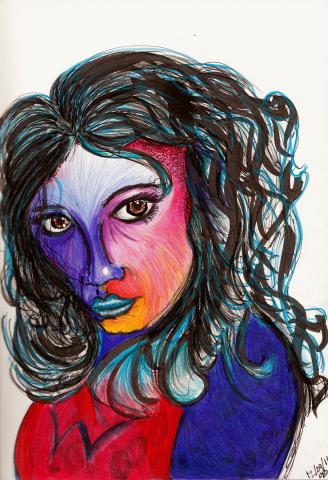 He would always do something and she would always figure out. Fighting to hold up the relationship to better the life of their four kids.

But she was tired.

She worked, came home, the homework’s not done and the school clothes aren’t washed.

She’s tired of this. She says that she might as well be on her own.

One day, she gets tired of it, packs up her and her children’s things and leaves him, with the youngest child only being 3.

She struggles everyday to make sure that her children have a normal life, but it’s hard. She turns to the government for help, receiving Food Stamps. But she’s not looking for sympathy because she’s still strong.

A couple years later, she meets a man. Her youngest two get attached to him. Her oldest daughter is anti social, so she just goes with it, but the oldest boy still wants his dad.

She still struggles, turns to the government again. Child Support from the daddy. He complains but why does he care? He just goes out and eventually has another daughter.

She turns her life to God and prays. She’s tired of always working and living pay check to pay check. But she doesn’t give up.

Her kids get older but still don’t realize how much their mom has done for them. They’re so ungrateful, but she still loves them.

She never gives up. She keeps fighting.

Why doesn’t anyone understand how much she struggles? But she doesn’t know that her oldest daughter pays more attention to her than she thinks.

This poem is dedicated to my mama. Telita Juanetta Hayes-Colbert. She is my role model and I’ve hurt her many times, but I apologize.

She’s always been there for me and my brothers and lil sister and we love her for that.

She struggles to take care of us but she’s never given up on us.

Poetry Slam:
It's All Up to You (CLOSED)
Guide that inspired this poem:
5 Tips for Writing a Poem About Friends/Family