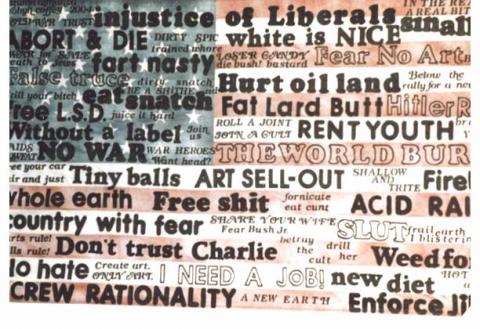 at least that's what we're selling

but the product must be damaged

there's not one damn soul that believes what we're telling

Let's take a look at all the changes that have been made. If I asked a blind man he'd tell me he sees the same.

The people of America have blindly walked through this country

going through each and every day numbly

It takes a brave man to walk in a country where you can find more hate than love, as Americans that's what we should be sick of

We paraphrase a document written 200 years ago, and tend to get mad when electronics are moving slow

but what about our country....?

Brainwashed by technology, we've failed to notice our economy,

Blacks are being hounded down like it's 1619, whatever happen to doing the right thing,

I can’t find it in my heart to agree

Whites are seen as superior and privileged and that's how they are treated, but all lives matter...as least that what they tweeted.

My friends birth country is Iraq, We silently judge...thinking she might attack

As society changes, the cost of living goes up, good luck; finding a job that pays over 8 bucks

Of course with an education you get a higher paying job, but  with student loan debt we're practically being robbed

while 42 million of our people are suffering from hunger,

Of course...They can keep living like that, but for how much longer?

On the other hand the United States Department of agriculture created MyPlate, but America still has one of the highest obesity rates

Don't get me started on men and women equality!

that's not fair in my book, but I'm just a girl what do I know

As people of this country we continue to point our fingers in different directions, I got one question...how much longer until the next depression?

A change has to be made, we can't progress, living the old country's ways.

But this is the American dream, at least that's the way it seems,

Until then Welcome to the land of the free and the home of the brave.

Poetry Slam:
America the Great?! Scholarship Slam - CLOSED
This poem is about:
My country
Our world