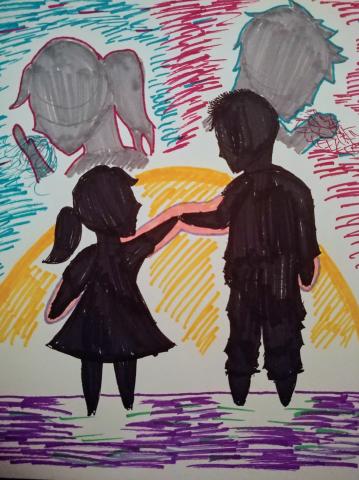 Every time we go to the beach, I am reminded of when we used to live with our grandparents because you nor Mom had enough to keep a roof over all of our heads.

Mom was working non-stop or going out with her friends and whenever she was home, she was tense and I don't ever remember her genuinely laughing or smiling unless she was on her way to a party.

I remember thinking that you were the nicer better and barely ever left your side because you showered my sister and I with gifts and affection that labeled itself "you're my little girl."

Then, I noticed you got angry at everything that wasn't up to par with you. A room that just wasn't clean enough, your job, your plans, your daughter's attitude, and your wife. If it didn't match up with your standards, everyone would be able to see the wick turn into TNT.

Seven years old, you pushed mom down the stairs. Every Friday at lunch time, I would go to a counseling class for kids who's parents who "broke up." I thought it was cool because I got to skip some of class, pick a friend, play games, and get candy afterwards.

Eleven, you told me that you didn't like who I was becoming right as I was learning to love myself.

Twelve, you told me to not love myself because it was stupid.

Twelve and half, I learned that you were not the nicer parent. You never paid the bills because you thought it was Mom's job since he's watching the kids and you were angry all the time like it was an on and off switch that was just a flare away from burning down our new house.

Thirteen, you held me for the first time in what seemed like an eternity but only after finding out that I wanted nothing more than to no longer be in this world.

Fifteen, I stopped trusting you since every request turned into blackmail.

Almost sixteen, I stopped calling you "Dad" and called you "Father."

Eighteen, you called me fat and told me that my happiness doesn't matter.

Nineteen, your harsh words turned into actions and although it did not hurt, I could feel my heart begging to stop every time I think about it.

You punched me, you slammed my head, you pinned me against the wall and choked me. That's not the father I remembered as a child.

That's not the man everyone knew him as either so when people heard about it, there was only silence. I was to be kept quiet about it and live with the thing that I dread waking up to, seeing, and talking to but excuse me I thought violence should never be tolerated and I thought girls are to be respected and people should have rights to what they do in their lives, but no.

Silence was made and forced on to me, causing a tornado in my head, an earthquake in my chest, and a tsunami of tears almost every night drenched onto my bed because I didn't think I deserved that treatment.

People would tell me to remember all the things he does for me, but I don't think that shit justifies his disrespect towards the people who share his life, his house, his DNA.

I trusted you to protect me, but you made bruises and scars that still shed tears and flinch whenever anxiety hits.

I cherished the moments that we had when I was innocent and young so maybe that's why I endured the silence for so long, but I can not forgive you because even now, you seemed as if you haven't learned a god damned thing.

But because I loved the man you used to be, I will hope for you to learn the actual defintion of love.

I will wish for the man you used to be.

I will wait for the day I can call you "dad" again.

P.S I hope it happens soon. I miss you.

This poem is about:
Me
My family
My community
My country
Our world