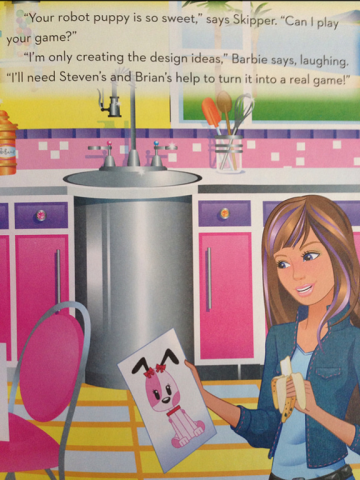 Suppose there exists a girl Barbie.

By the prevalence of reinforced gender roles in the gaming industry:

Barbie grows up clicking and dragging images of food and babies

Instead of developing her strategic thinking skills.

By the internalization of these gender roles:

And begins to lose confidence in her own abilities.

By the self-fulfilling prophecy theory:

Barbie does not believe she has what it takes to be a computer engineer.

She limits herself to designing games for her more capable male friends to code.

By her ill-preparedness to cope with the Imposter Syndrome she develops:

Barbie asks her friends for help

And then takes credit for their work to mask her insecurities.

Hence, by the definition of harmful stereotypes:

Barbie has become the epitome of society’s image

Of a woman who tries to start a career in technology.

Once again by the prevalence of reinforced gender roles in the gaming industry:

Flannery grows up playing the same games that Barbie did.

Also, by the internalization of these gender roles:

Even though she is pretty good at it.

However, by her high school’s required curriculum:

Flannery has to learn how to survive a pre-AP computer science course.

By her aversion to math:

Flannery decides to approach Java as if it were French or Spanish,

Making flashcards for the basic vocabulary

And focusing on how the structure of a statement creates meaning.

By the transitive property:

Viewing the numbers, variables and operations as the components of a language

And seeing beauty in it for the first time.

By the realization that she has the capacity to understand complex ideas:

Flannery signs up for three more years of computer science

By the mere exposure effect:

Flannery learns how to cope with the “dudebros,”

Who make snap judgements about her at competitions.

Hence, by the definition of reality:

Flannery starts to embody the spirit of real women in technology.

Therefore, by the definition of inequality:

Flannery is not equal to Computer Engineer Barbie.

Poetry Slam:
#NoFilter Scholarship Slam - CLOSED
This poem is about:
Me
My community
Guide that inspired this poem:
Create a poem about inequality.

69 reads for this poem