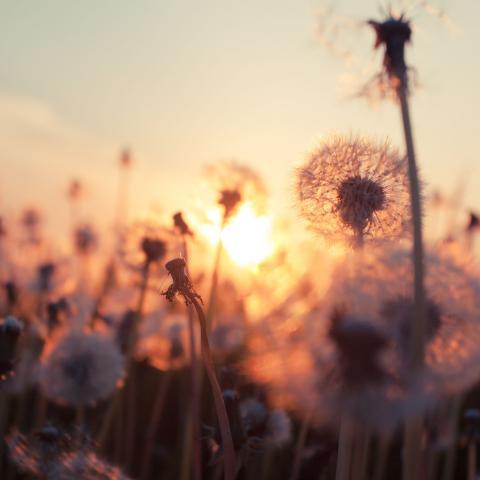 In a field of green with grass overgrown,

Where the sun touched the earth and moon sang her tune,

Sat a maiden of gold and a heart so sweet,

With hair a gentle white and her smile a radiant cheer.

The girl dwelled among her sisters who numbered as stars,

All strewn about the waves of green blades in groups to daydream,

The maiden was not special but her presence was a delight,

Quite so to the children who run about her home.

The girl’s divine voice could reach to the gods,

And she made wishes for the world to better their lives,

She granted small desires for others and never asked more of her life,

Though the rosette-dressed girl was light of burdening much aversion,

There lived not far a looming lord who saw her through eyes with distaste,

So the day came when her green field and sisters were all wiped,

A roaring monster set down upon them from their neighbor’s roofed cage.

As the green field’s wild grass were cut to conform,

To a clean tidiness that pleased the brutal lord,

Her sisters fell to the massacre, exposed to the monster’s jaws,

Their silence rang out to the skies until only she was left.

Her tears fell softly and the skies rumbled gray,

The fields of green and gold were all but up cut away,

The maiden closed her eyes shut as the monster bore down once more,

And made a last whisper of wishes that was carried through the air.

And once the monster returned to its master with satiated appetite,

The heavy skies poured down its sorrows and remorse,

The cries of the sun’s children called out to the moon,

Who sang her dirge to the dim lit stars.

It blossomed into petals as bright as the maiden’s smile,

The moon mimicked her brother and presented her glow,

And matured the new flower to a wise bloom of white hair.

Finally, the stars touched the petals with their charm to honor the beloved losses.

Once all this was done, they admired their creation,

A worthy thing to remind the world of the one that had shared,

For some reason, this poem makes me want to run through a dewy field in the early morning barefoot. Is that strange? Such is art, I suppose. Really well done. :)

21 reads for this poem