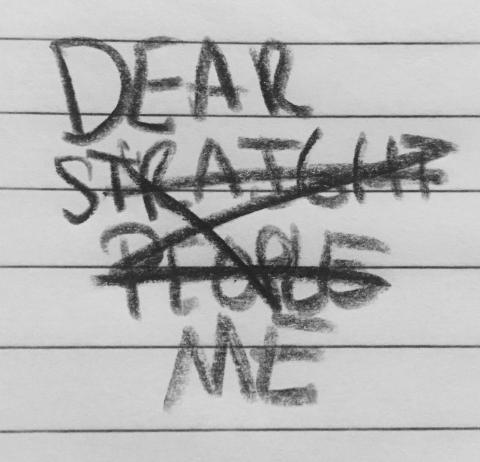 these two situations are not ideal in combination:

and realizing that gay is a synonym for your name.

but that was my summer before eighth grade.

see, it's ideal if one has an artistic outlet

as an itching insatiable insufferable pipsqueak,

but here ye, confusion was this teenybopper’s kingdom and flailing was my royal profession.

i had an affinity for aesthetic and convenience but that's about it.

(not too many expressions are moldable into thirteen year-old letters that i could have used,

those words are too indecisive and slippery.)

truth is, my body sat too comfortably in the closet of mendacity while yearning for a vestment of artist,

needing so badly to speak some words,

but i was about ready to settle.and to get boring.and to get quieter.

i call it the foreground

of the next greatest cognizance.

slam poetry had garnered my interest late that summer, i'd seen the phrase thrown around on tumblr posts,

and i took to youtube for a daily video on the button poetry channel.

spotted on a thursday in august on my broiling laptop, saturated in navy tones was the icon of a video that had amassed thousands of views--

the thumbnail showing a woman with short dark hair, her eyes shut, her mouth close to the mic, her finger pointed to the sky,

queer me saw the adjective of my supposed opposite,

what starts as vocabulary recognition shifts to intrigue,

and in the vid,

the poet raised her head,the poet was chawing, the poet was genuinely and completelyasking,Denice said,“Dear Straight People...who do you think you are?”and when she crossed her arms over her chest, my heart was opened.never before had i found a roast so hysterically lyricalas the poet addressed the entire collective of heterosexuality,my preteen giggles harmonized with the adult bursts of the audience, my middle school eyes wide at the pummeling of curses,the vessel’s poised and wily blasts were watertight, terse but not without a pulse,she painted out sentences and lifted inquiries with her hands,she performed her audit of the system,her exasperation of the ostracization, her comprehension of the ridiculous, her diction of the queer experience,i was laughing at both Denice’s clever quips and my discovery of a delivery from silence.i had clicked through on a link which was more of a sync,

in my earphones was a language i discerned, a genre in which letters provided pitches and

the pacing went in time with my heartbeat,(if it is not too early to say,in the summer before eleventh grade,that i was aligned to my art form,)

see, Denice was Slam Poet and Competitorbut more than that i saw a woman who needed so badly to speak some wordswearing a vestment of artist that consisted of a baseball tee and queer frustrationcreation seemed to be more of a generous act now,if there is any solidarity in the world,there was certainly some poured into that mic that night,Denice ended that poem with victory.and i intendedto step from my summer with that rare quality.have you ever been so overwhelmed by something that you were so inclined to make art of it?it’s a pure and sufficient outlet, this poetry thing,for i am able to engrave the days with a veracity that is aboundingly original, with a word choice so flighty,the tion's i omit,

my root word wielding,and ignorance of parts of speech but my priority to my soul, my listening to my soul,sometimes people help other people realize that they're gay.

i had a different kind of coming out, someone made me realize i'm a poet,

for these fingers now waltz on letters and sculpt stanzas,and the hours before my encounter with dear miss frohman were my the last poemless moments.

flailing alyssa was reeled in by the woman’s gritty, plucky steering,

focusing my synesthetic spew of sparking contenders into verse,and sorting my issues into meter,i am in rhythm with the mess of me,i write poetrynearly every single day.i’ve got an avidity for aesthetic and volume,i've cast out convenience as an essential tenet

because a queer girl's life with never be opportune,

maybe not even poetic,

but oh so advantageous,

such grounds for such self-love,

such means for journeys,such means from creation from the ground up,from the stand to the microphone,such space for words.

Poetry Slam:
You, Me, and Poetry Scholarship Slam - CLOSED
This poem is about:
Me
My community
Guide that inspired this poem:
7 Tips for Writing Poetry About LGBTQ Issues
Poetry Terms Demonstrated:
Juxtaposition