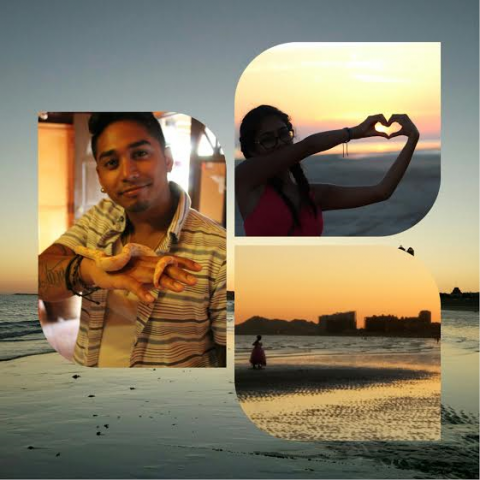 Grave me with the words left unsaid; that drowsy night under the light pole I was waiting for a man who said had loved me.

Day after day I was left with another and another man where I was naive enough to assume what love was.

My bloodshed had splattered across the pavement and I couldn’t handle the pain.

Coming home to my pitiful mother unexpecting the sorrow I had carried every everyday.

High school, I thought I would be friendless and alone with my books.

Yet to discover the rain of men to follow the girl who had yet to hit puberty until junior year.

All these "men" had thought this youth of a idiotic girl can fall easy into their corrupted hands and can easily sleep with her then go.

To their surprise my mother had taught me well enough to open the books not my legs.

The day I lost my virginity was the day I thought I was with the guy I would marry.

I had disappointed my mother with a blind eye.

I tried again with another. But this time I was I a freshman in high school.

Beginning my adventure in college I immediately fell head over heels for a snake disguisted as a man.

With his jargon words and plush display of "affection".

My love wasn't the legs that had been spread but my heart that I offered.

I was an idiot to believe this man really cared for me.

Please he was almost thirty and I had barely turned eighteen.

My mother warned me but I felt rebellious.

He said he was a giver and a man to enjoy his own pleasure with the hands of a pure soul.

Repaying me with luxuries and grand social events.

Once I was left under that same light pole late night I realized my love was nothing but the crave of companionship I missed after my solitude from high school.

A year has passed, now with a stronger intellect and a more stable heart I can see right passed the next snake who stands in front of me.

A past love stands before me what to do.

Blinded by our childhood memories left me weak to my knees every time we met.

His inspiration of poetry was similar to mine.

When we mingled our letters became words and when we whispered they became sentences intertwined with the soft love made inbetween the next chapters that defined us.

Our love had came to an end when he was the one chained to the light pole for years to come.

The slip up made with a prior love.

She chained him and threw the key into the ocean leaving him hopeless to her own power.

Freedom is no longer an option as our fun has been cut short because we all know a man with an expecting baby is not sexy.

I can’t create the silhouette of our poetry and only be the love note under his pillow.

Months have now passed once again and how I move on so easily, but isn’t that what being "young wild and free" means?

The passion takes over me everyday and I become consumed of my own poetry to the point where I am taken into another dimension.

Where my fears come alive and the romance novel I spent months working on comes to save my sorrow.

The input of love and hate was the birth of my constant craving.

The ridicule as a child, the jealousy, the discrimination of this “teacher's pet” ignited a flame that only grew.

Every tumble, every new friend, new enemy; every encounter became another reason for me to expand my realm.

In this realm, I have a Prince Charming from the dynasty of love but I do have a Romeo yearning for his lust from dear Juliet.

The realm I create is intention to not show weakness but what grand i’ve become with this gift.

To share a mere quote in order to save a life or create an uprising of happiness is a magnificent feeling.

My mother never supported my poetry she believed it was a waste of potential, that I was lost in my land of fantasies.

What she never understood was that her fantasies of forcing a career down my throat.

I was pitied she said, comparing herself to other mothers; believing she’s done what’s best by tearing away the dreams of a dreamer.

I will stand strong to encourage any other poet who has been lost in their own fantasies but to rise.

Learn from me, breakups and hookups are a good inspiration but when they break your walls of bliss hating them will become a waste of effort in the end.

Poetry Slam:
You, Me, and Poetry Scholarship Slam - CLOSED
This poem is about:
Me
My family
My community
Guide that inspired this poem:
Step Up and Slam!
Poetry Terms Demonstrated:
Imagery