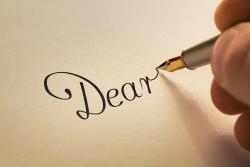 The modern millennial might say that emails are the new letters—that letters are an old-fashioned and outdated form of communication—but there's something respectable about letters that makes them a really powerful format for creative writing. Maybe you have something pressing to say or maybe you can't think of anything at all; either way, writing letter poetry is a simple way to stretch your writer's muscle and express yourself.

Dear Me ( My World of Perfection )
Dear, Me        I seen myself looking in the mirror as I reached to touch the broken glass that seems  to look so...

A letter to the past
Dear Me writing that was writing the 1st draft of this,   It was three years ago but it feels like yesterday And that’s...
END_OF_DOCUMENT_TOKEN_TO_BE_REPLACED