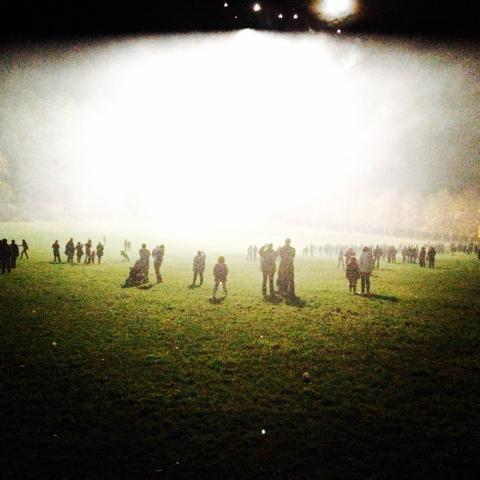 The first time I saw her,
I was ten, and the sky had just started to fall.
There were sirens in the air,
And I kept looking around for red and blue
Lights that flashed and spun in the darkness.
They'd always come before,
When cop cars and ambulances and firetrucks,
Screamed their way down the street.
I lived a block from the big Memorial Hospital
So I saw them almost every day.
But these sirens didn't have their pretty companions.
It wasn't dark, though the stars were out,
All around was harsh white light,
Which made me squint and shiver.
My mother had my hand so gripped tight,
I could feel her freezing fingers
Through my wool knit mittens
With the monkey in red and grey.
She pulled me along as we shoved through the crowd.
I thought that everyone in the whole world
Must've been heading to the station,
Just like us.
And through that mass of people,
Breathing cold clouds that warmed the night,
Uniforms stood, black blobs with white light glistening.
I didn't hear what one said,
He was so big, like a mountain
Clad in the armor that I didn't know came from the sky,
But he said it again, louder,
And pulled her from the crowd.
She looked like me,
Young and wide eyed and wondering,
About the people, the night,
The sky open above us and covered,
Smothered with those white lights,
And he had her by the arm in a second,
His fingers all the ways around,
Even her red puffed up coat.
She stood on tip toes, struggled,
Crying, shivering, shaking her head,
Black silk curls catching the light,
Only her porcelain face and cherry coat
Stood out against his heavy mail.
She looked so afraid, he shook her so hard,
I cried out, and wrenched away,
From the mother who'd never stop
Worrying about me, never stop
Telling me not to go.
I shoved through the roiling mass
And came tumbling out before the uniform
On his raised black dais.
Her hand was sheathed in brown leather,
And it flailed out, no longer hitting at him
With tiny curled fists, useless against armor.
I reached out, and took her with my mitten.
Little hand wrapped up in slightly bigger hand,
But only bigger because of wool and warmth.
I yelled and called him names, I said,
"Hey!" and "What'cha doin?" and "Stop!"
"Let her go!" "She's just a kid!",
And before I knew it, he dropped her down.
She landed on me, and I fell on concrete sidewalk
With an Oomph and a Thud.
He shouted a command, a growl, a threat,
But I thought it was muffled by
The grated face mask, mirrored but blacker,
Than obsidian night and coal mine days.
I stuck my tongue out, started to form
A vulgar word beyond my years, and the girl
Still holding onto my mitten, shushed me
And pulled me back into the crowd.
"Where's your mum?" I asked, now more interested
In crimson wool and soft brown leather,
Than where the siren's lights were hidden.
She didn't answer, but looked around,
Walking, dragging me through the crowd.
Fast, she was so fast, and I had to keep up,
So even though my cheeks were pink,
And my breath shallow, I ran with her.
Quiet, no questions asked.
When we got to the station, with its lines
Of trains and families and Uniforms,
She slowed, and stopped, and turned to me.
I saw cherry red lips and honey brown eyes,
I saw youth and hope and bravery,
And I saw gratitude, when she pursed her lips,
Whispered thanks, and raised
My mitten covered knuckles to her soft mouth.
A shout from my right- I turned,
My mother peeked between two others in a line,
Her hand was raised, she called my name.
My hand was released, and when I turned back,
Those pretty lips were in a ghost of a smile,
And her eyes sparkled as she told me to go.
So I did, and I wondered as I ran,
What she'd seen in my face,
If she'd seen anything like the fiery spark,
That I'd felt in hers.
I buried my face in the warmth of my mother's coat,
And looked just over my shoulder,
As if by not twisting my head I could catch
The girl by surprise, but no.
She'd melted into the roiling sea of people,
Under the white lit, freshly fallen sky.


I thought I saw her,
When I was two years a teen,
And the trains had brought me to the school.
In there, the new place,
Everywhere was inside, I never saw the sky,
Except in movies and projected on the ceiling,
Of that blue domed planetarium,
And I was only ever allowed
To write letters, record videos,
To my mother. I never saw her,
Or received more than the same five messages in return.
Once I saw the cycle, saw the signs,
My attempts at correspondence dwindled.
I faded easily into the life
Of a High School, Catholic School, Boarding School girl,
Black ballet flats with a little bow,
Black knit tights that tore too easily,
Black and red pleated skirt falling just around my knees,
And that white blouse I could never keep clean.
One evening, walking from the loud buzz
Of a plastic tabled cafeteria, towards
A plastic desked bedroom, through
The covered courtyard, lined with blooming bushes
I swore I saw a deep red peacoat
And bouncing black silk curls.
Between huge blue and white bouquets,
Still attached to their native twigs,
And pointy sprigs of gold I stepped,
Chasing the girl I knew I saw,
I had to have seen,
Sneaking behind that rough barked tree.
Yet, when I finally swung around,
I found naught but air,
Captured, processed, oxygen rich,
A prisoner in a silver plated cage,
Free from girls so powerful,
A soldier from a far away orb
Was so afraid that he pulled her out
Of a fleeing mix of those crushed masses.
Where was our singing statue,
Giving light in return for
Huddled masses, those tired, those poor?
Ah, though, we weren't those refugees from far away,
But rather those set peoples already there.
We weren't coming in through the New York isle,
We were being marched, tied and bound,
Across our neighbor's lands.
I slid down the craggy tree,
Catching scratches in my cotton blouse.
Angry tears of heat, of that rage
Which flows through all us tethered beasts,
Flew from my dimpled cheeks towards
The fake earth on the ground.
I cursed my luck, my lot,
To land me chasing half dreamed ghosts
Through deserted prison yards.
And then I grinned, and then I laughed,
And madness wrapped arms around me.
If made up girls and wishes
Made girls like me insane,
So be it then- and for my pains,
I'd find escape from that wretched place.
I was a dreamer, I'd admit that freely,
But that first taste of freedom
Needed to incite a fight,
Can be just a hallucination,
Of a once seen crush from long ago,
And have a strong enough effect.
I swore I'd see that girl again,
Taste cherry lips and hidden smile and
Wrench myself from these uniformed guards,
Who had me by the arms.
I'd find that girl and sweep her off her feet,
Turn my daydream into a rousing symbol,
Of one day running free.

I knew I saw her,
The year I would've been able to drive,
Had my world not ended when I was ten.
I struggled through a tiny square
Lined with broken glass, my arms
Being pulled through by a boy without hope,
My legs being pushed up by a girl,
Without fear. There were tears in my skin,
And tears in my eyes as I fell out,
Reborn underneath a green clouded sky.
I winced as blood and salty sweat
Mixed on my skin, but turned around
And thrust my head and shoulders back inside,
Far enough to hold onto May's wrists,
As Joseph gripped my calves and tugged,
And we were midwives together,
Bringing that girl, renewed,
Into the shrieking world.
Joseph stood, dusted himself off,
Sniffed at the air and grimaced.
"It smells like their ships"
"Like their fuel, like their sweat"
"Like our blood and life."
May smirked, and turned,
And jogged towards the clear fences,
Made of white woven fire.
They look like lightning, at first,
Criss crossing in a constant storm across the land,
But when you touch them, your ashes
Coat the weeping ground before you feel the burn.
We didn't know that then,
May didn't know that, or that
Even the air between the chains
Is fire.
I must've made a noise,
Because a second later, Joseph
Had pulled me to his chest, nose in my hair,
Mumbling, "Don't look, don't look."
We ran, away from the fence,
Along the buildings, looking for a break.
Sirens began to call,
Like they had six years before, but
Not like they had.
A different pitch, a different wail,
No human child's scream, but rather
That of some beast you'd prefer not to see.
I could feel guns in the sky,
Trained at our heads,
So I ran harder, faster, flat soles
Smacking against cement ground.
Outside the fence was forest,
Somehow alive, when the cities were dead,
Or maybe because,
And I scanned the trees with searching eyes,
And met eyes, dripping with cranberry fed honey.
There she was,
Coat gone, torn, discarded and replaced
With black armor stolen from an angry uniform,
Watching us through the dwarf star chain links.
I almost opened my lips to speak,
But Joseph saw her, tripped over his feet.
A shot rang out in the night.
I thought he died, on the ground,
Wordless, a scream tumbled from my lips,
As I tumbled to my knees.
Before he sat up, and gaped, mouth hanging open
Like a fish outside of water.
I followed his gaze and saw first violet smoke,
Pouring from a rend in the white metal,
That made up the violent fence posts,
But that's not what made him gasp.
The girl had stepped through the air,
Now clear and almost clean,
She strode towards us, metal weapon at her side,
Her armor's matching mask hanging
From a cord around her neck.
Her lips were paler now,
And her hair tied fully back,
But her skin was just as pure as fallen snow,
The way it was so long ago.
We met her half ways across the grounds,
Of the prison in a school,
And though Joseph darted through new made gate,
When she outstretched a mail gloved hand
I took it.
And let her bring my knuckles to her lips.
Sirens quieted around us,
Buzzing shouts from inside ignored,
And though I bled, from forehead, sides and arms,
My cheeks were filled with sudden warmth.
I grinned, the way I'd done as a kid,
She turned, hand still gripping mine,
We crossed the fence side by side,
Running through the dangerous woods,
Breaking all the rules the fairy-tales
Set before us children as the truth.