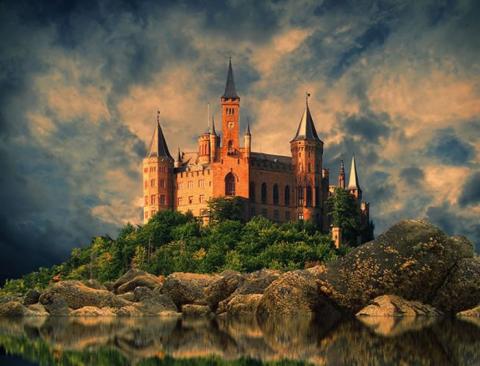 The classic fairy tale of Princess Aurora is known by all

How she pricked her finger and had a tragic fall

Into a slumber so deep and so long

That only true love's kiss could correct the wrong

But unknown to many this isn't the whole story

So please continue on, I'll tell it, it's mandatory

That everyone, far and wide

Know the true story of Aurora and her prince's pride

Most of the common fairy tale is true

With Maleficent, the three fairies, and the dress that turned pink and blue

But where this story takes a strange turn

Is with the sleeping spell, on this I focus my concern

Like most believe, Aurora did prick her finger on a spinning wheel

Most believe she was simply sleeping

But I assure you she was doing much more than dreaming

While to all eyes her body seemed in peaceful rest

She was actually quite awake and on a special quest

In this dream world she had to find Maleficent, and do it with speed

So she and the entire kingdom could be freed

With beautiful forests, trees, and rivers, all so grand

While she wanted to stay and enjoy this paradise

So she set off, down the path that led into the glen

Keeping her eyes peeled for something suspicious, when

All of a sudden she saw in the distance

Off she went, with a little glimmer of hope

"Maybe I can do this." She thought as she walked down the slope

With a little more effort she finally reached the castle door

And she reached for the handle, her fear she tried to ignore

She walked inside and in this castle much rejected

She found Maleficent waiting, as was expected

Maleficent stood with a wicked smile on her face

"You'll have to defeat me if you ever want to leave this place."

And with that the witch turned into a great fiery beast

And leapt at Aurora, all of her anger released

But Aurora had no fear and wielding her sword

The beast stumbled, struggled, and fell

The death of Maleficent had broken the spell

And when Aurora had finally awaken

She saw her prince by her bedside, deeply shaken

"This doesn't make sense. I thought I was supposed to wake you.

But no matter how you did it, this will simply not do.

The kingdom will expect that I saved you, and that is what you will say,

Or your entire kingdom will be eternally cursed this very day."

And she made a decision that was very wise

And I am entrusting you with the job to convince

61 reads for this poem