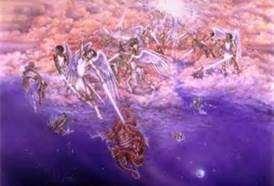 They say he was the most beautiful angel of all, but he questioned god’s rule and thus had to fall. Sent down below like a misshapen star, he was made to imprison all the evils there are. His name it lives in notorious infamy, made out to be the world’s greatest enemy. Yet sinners they come into his domain, and led by their own evil remain. They cry and rejoice for the devil’s company, after all he’s said to- like them, have no humanity. And the devil he curses at their stupidity, more than any other he should be granted sympathy. He punishes the wicked and keeps them in check, carrying on justice without any respect. He gets blamed for the hunger, the murder, the chaos- yet he knows like no other this evil is entirely human within us. Imprisoned himself he would repent if he could, perhaps out of all he is most misunderstood. To control and strike down criminals is only his capability, why would god endow an evil with so much responsibility? These rumors of him endure a great humility, for he alone takes the blame for mankind’s brutality.