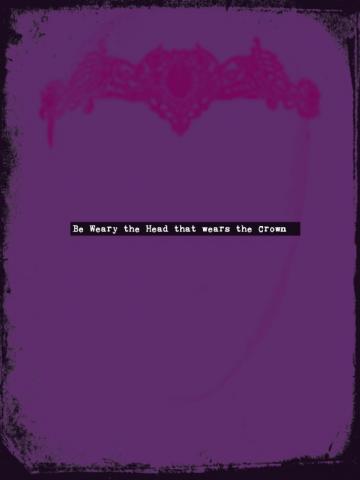 "Why must she be so gorgeous?"

I look at the young girl playing at my husband's

feet. She has his expressive, thick eyebrows

and aquiline nose, but

"She looks more like Aminata than me, thank the Gods!"

mock me across Marianne's features

"Silly Avita, the Crown Prince will marry me and

we'll both move into the palace and live there!"

I bite my lip.

That was before Aminata's parents

mercilessly threw me out

"She has stolen the family jewels, Frederic! Filth as such

will not stay under this household"

The blanched look on their faces as

was announced as the Prince's Bethrothed

almost sufficed for all the damage-

but there's still work to be done.

The girl looks up at me,

drops wooden horse at my feet

She smiles, a full

parody of my childhood playmates.

Fully aware of the court,

judging my every action

I pick up the toy and smile

"It's wonderful to see you all geting along

at the sight of

his new wife and his daughter

"For the cause, Avita, you must infiltrate

the palace in order to tear it down from the inside"

I have done that already,

I wooed the Prince,

comforting him after his wife's death

Now I must play the long game

plot until the moment is right,

and we can pull all the strings down and

before any of that is to happen,

The girl and her father