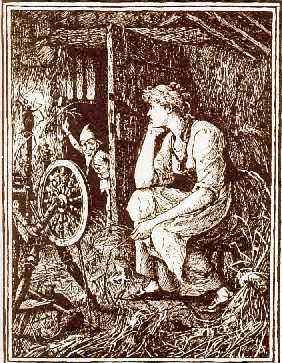 Was a victim of the boasts of her father.

While he was feeling bold,

He told the king she could spin straw into gold!

The king locked her up

In a room with no windows,

That was full of straw with a spindle.

He ordered her to spin it all that night,

Or in the morning he would take her life.

Alas, she had no such talent.

She cried in the room all by herself,

Until a strange sprite offered her help.

In exchange for her ruby ring,

He could complete the task to satisfy the king.

The very next night,

So her silver necklace she sold

To the funny little sprite

Who helped her survive one more night.

But on the third nightfall,

She had nothing left to give.

She promised her first born so she could live.

Slinking away with a twinkle in his eye,

The sprite knew he only need wait for his prize.

And on that morning,

But to his great surprise, she said no.

She rejected the king who threatened her life,

And married a boy who treated her right.

But what happened, you ask,

Of the girl and her love connection?

They lived happily ever after -

Poetry Slam:
Once Upon a Poem Scholarship Slam - CLOSED
This poem is about:
Me
My community
My country
Our world