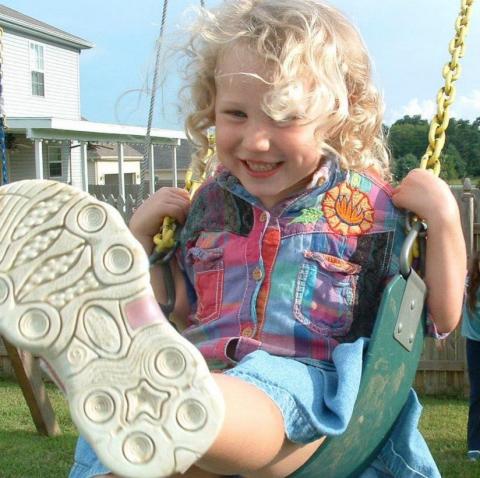 I remember the morning I was riding my tricycle

across our large and gravelled driveway.

and I thought that it was the greatest thing ever.

You saw me riding, and noticed how the two smaller, supporting wheels

were kicking up every little rock and pebble and twig.

You watched how hard I had to peddle to keep it going.

To me, I was speeding past the world;

nothing would be able to catch me once I got going.

Except you. Somehow you had that superpower ability to catch up with me.

P.S. I let you have it, just for pretend. I was still faster than you.

Smiling, you told me how today, you were going to take off my training wheels.

I cried like the world had ended in its orbit,

and everything else in life had ceased to matter.

Please no, I begged in youthful destruction.

Mom thought that maybe you should just leave them on,

but you had already decided that you were going to take them off.

No better time than now, you would say.

That tricycle was my portal to another world,

where I could escape and believe that the sky

in all of it’s bright glory and warmth

was made just for me.

The only consolable words you spoke were, “just wait.”

To me, they sounded more like a death sentence.

I chased after you as you carried the tricycle into the garage,

wiping the dripping snot from my face,

watching as you expertly took apart the pieces,

Never again would I get to ride my tricycle.

My life was over and I would be heart-broken forever!

The first may have been true-

I would never ride my tricycle again-

but the latter couldn’t have been farther from it.

I stood staring at what I supposed was

a twisted, bloody murder scene of my joy,

left in mangled pieces on that garage floor.

You helped me to get on my new bicycle,

new only because something had been removed

that had changed its title.

Feeling woefully unstable, I cried, more quietly than before.

But I’ll admit- I was mortified, and somewhat fearful for my life.

Before I knew what you were doing, you grabbed the back of the seat and pushed,

telling me to pedal as fast as I possibly could.

I didn’t want to, I wanted to get off RIGHT NOW-

but I decided to trust you over myself.

You were my father, after all.

I began to pedal, and once I could keep one foot followed by another,

I began to soar.

Daddy, you must have known something that I did not.

My training wheels were supposed to keep me from falling,

but instead they were prohibiting me from flying.

But you knew this all along,

I was the ignorant one.

I could restart the earth in its halted spin,

simply by the speed of my racing heart and tiny little legs.

Later that night, with a purple crayon and a purpose in mind,

I wrote you a letter on the folded piece paper-

trust me, every creative and well-thought word came directly from

a glowing fire within my heart,

that had been discovered by your confidence in me

-that- and my fancy, upgraded ride.

I hid it on your pillow, and giggled because I knew.

When you would come home from work

you would see it and know that I loved you.

You’ve got to give a girl credit for trying.

But gradually you got a lot busier.

I didn’t see you very often,

and mom said that you had to make money

to provide for us to have food and a nice home.

We did have a nice home,

and we always had food-

sometimes a little less would probably have been better.

Most days I wouldn’t get to see you.

You would get back from work after the sun

and I was supposed to have gone night-night.

Sometimes though, I would lay awake in my bed,

staring outside my large upstairs window,

at a crescent moon for hours,

waiting for the lights of your car to pull up

into the large and gravelled driveway

with a muffled crunch.

Sometimes, when I was feeling exceptionally brave

I would run down to give you a hug,

before I would be escorted back to my bed

because big girls need a lot of sleep

to have energy for 1rst grade in the morning.

I learned that being a big girl meant staying in bed

when daddy got home, and pretending to be asleep.

Pretending wasn’t as fun as it used to be

when I was in Kindergarten.

Late into the night,

I would hear you and mom argue,

your voices changing in dynamics

by the conductor of hasty emotion

echoing up the stairs and through the air vent in my wall.

From a hushed piano your voices would change,

trying not to wake my siblings and I,

yet rising to a fortississimo of frustration,

that after its strong and powerful finale,

became a pianississimo of hushed breathing,

which turned to a frightening silence of what may have been

If this lasted long enough,

sometimes you’d wake up the sun in the morning.

I would pretend it was only a symphony,

but I could not pretend to like the music.

an accepted and acknowledged universal truth:

and moms pretend that they are never sad.

I guess I’m not the only one who’s good at pretending.

But pretending got easier as I began to forget the way

that things once were. I was so young back then anyways,

that maybe my memory was mistaken by a child’s imagination.

Maybe this is how life had always been,

and I was just pretending that things had changed.

The only day Daddy didn’t go to work,

On Sunday’s we would go to church and sing

about how God loves his children,

and how trials make us grow stronger.

Sitting on a scratchy, carpet-like peui,

singing my sweet little lungs out,

my daddy helping me ride a bike without

training wheels, for the first time.

But not even church could keep the devil away.

I heard my daddy talking to my mom about the devil one day,

he called it ‘depression.’

Church had taught me that the devil had many names,

carried many deceptive mask and disguises,

but never had the word depression been spoken

in the walls of that church or the pages of my picture, scripture book.

Sometimes I imagined that depression was hiding underneath my bed,

or crouching in my closet, or swimming across the shadows on my wall

as I lay silently staring at the ceiling in the dark.

I would pretend that depression had big teeth, scary black eyes, and a whip,

because my father was the bravest man I knew,

and he was terribly afraid of it.

If my father was trying to hide from depression,

then I wanted to be far away from it too.

Pretending was no longer numbing to me,

With offered gifts that were never wrapped

in pretty shimmery paper, or topped with a golden bow.

His gifts were broken and brittle and bloody,

Than the life he was currently living.

I didn't know this back then

But his thoughts were enveloped with the images

Of one hand gun. One bullet. And 3 more seconds.

In his mind, his finger twitched on the trigger

And he would pretend it was the end.

Of his painful reality; it was finally over.

When did pretending become so real?

When I was praying to be free of braces,

My daddy was pleading to God with a heavy soul

For some worthwhile motivation

Sometimes I blamed myself.

I was awarded the title of family peacemaker.

I was nicknamed my daddy's little angel girl.

I even had a lime-green shirt that said so.

I was supposed to make everything better

In this crazy cruel confusing world.

That was when I learned that pretending away these tears,

You beat that devil

Sharp teeth, dark eyes, his whip, and all,

When winning meant just getting through the day.

You found your lasting motivation

In those that will always love you.

And your strength in your own self-determination.

Thank God, God had your back.

Devils have their places,

But Depression no longer lives

Behind one of your faces.

I no longer have to pretend to be okay,

Because my daddy has returned from

An ugly darkness to where he is finally safe.

Poetry Slam:
Slam for Suicide Awareness and Prevention
This poem is about:
Me
My family