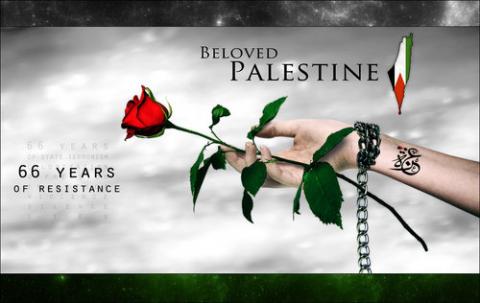 Where the ethnic cleansing of Palestinians is trivial,

And kidnapping, killing and torture is seen convivial.

Where massacre and genocide is acceptable,

And to the world, perceptible.

Where kids writing messages of mockery on missiles is democracy,

And blaming other nations for illegal nuclear weaponry is hypocrisy.

Welcome to a nation of racism and terrorism,

Where terror reigns under a Zionistic system,

And families are separated by a great wall as a schism.

Welcome to a nation of stolen property,

Where illegal occupation is considered for a matter of peace,

The indigenous people left to be policed,

And equality is left to cease.

Where inhumane acts continue to become exposed within time,

And remain to be ignored as would a speechless mime.

Stories of torture and pictures of inhumanity are released,

Yet we still search and fight for peace!

Suffered from serious asphyxia till death took a hold,

From Israeli soldiers that threw tear gas into his home, without being told.

Or what about the young man whose photo was released from the courtesy of two Israeli soldiers,

Who just so happen to be standing above his shoulders,

Smiling beside him– yet they never asked for his smile,

Since it was their new artistic style,

Because taking a picture of the man they cold-bloodily murdered was meant to be worthwhile.

Palestinian blood painted on the world as it’s become our tragedy,

For allowing such inhumane and monstrous actions of savagery.

They walk through a memory of their home and exile, of darkness and light,

Isn’t every being guaranteed their God-given human rights?

Yet we allow a man to be arrested, beaten and stripped,

Out of his clothes and left with his dignity to become encrypt.

Shot as he went to go pick up his school bag,

Leaving him paralyzed waist-down with damaged organs, since he was a “red flag”.

And what about our women and children who are oh, so innocent,

Raped, killed, tortured and beaten since they are considered vigilant,

Like Um Al-Tawi who was brutally beaten until unconsciousness struck,

Then they attacked her 15 year old daughter, just out of bad luck.

More effort than could ever be done by the World Bank,

But Palestinian we were born,

And to protect our land and people we had sworn,

Stones carved in our hands,

To fight with honor and stand,

Because it, too, is our Holy Land,

And our presence we insist,

Because being Palestinian means you exist to resist.

63 reads for this poem