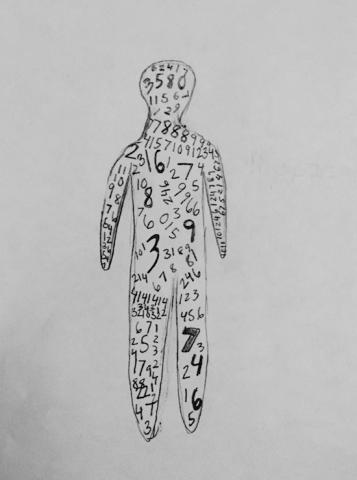 A collection of numerical digits

that tell you everything you need to know to steal my identity,

but not to keep it.

A lot can be said with the characters 0-9.

one microphone to sing out a message.

This is what I do; this is who I am

drawn out on a number line,

graphed in a coordinate plane.

My identity is not single-digit,

Our sum is greater when we are together.

Cousins that can't be counted using only two hands.

Two cats, one dog, one family,

Small numbers that build the foundation beneath my feet.

A small circle of best friends,

A larger circle of friends, of teammates,

An even bigger circle of acquaintances.

by the number of breaths between our laughter

and the steady one-two-three of our hearts.

There are billions of people I will never meet.

But I am immeasurably grateful for the small number

of which I received that privilege.

(They are my identity

At two I am cute, though unremarkable—

At four, I am a princess, and then the president, and then a mermaid, depending on the day of the week.

At six, I am an elementary schooler, a friend, and a dreamer

placing myself in a big kid world I don't yet know I'm not ready for.

a title I accept but do not quite grasp.

and eat them at recess,

oblivious to anything the future might have in store.

By ten, I write poetry

and read it to the class.

"You should be a poet," from the mouth of my teacher,

and the six year old in me thinks that is an excellent idea,

though four thinks it's a little bit boring.

But by 12 that has been forgotten,

too impractical, too unstable.

I only write poetry now when the numbers on the clock read late into the night,

hundreds of words that I do not show to anyone.

I laugh with my friends and try not to think about it.

The future is uncertain,

thousands of days ahead of me,

At 14, high school is looming,

7 tough classes, 180 days of school, one backpack and one bundle of nerves.

Time is told through the number of assignments I turn in

divided by the grade on top of them.

and a future that's never been more difficult to see.

It hasn't been easy;

The weight of being "gifted" threatens to crush me sometimes;

the number of pounds is almost higher than I can bear.

But I bear it— and I maintain,

with piano, with running, with relationships, with poems, with life.

My future is wide open.

This is my identity—

I've heard it said that it is impossible

to define a human being.

Because people are too complicated,

I only need the characters 0-9.

Poetry Slam:
I Am... Scholarship Slam - CLOSED
This poem is about:
Me